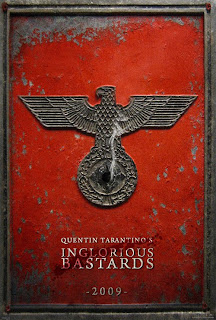 Presumably most people are familiar with Quentin Tarantino's newest film, Inglorious Basterds.  Obviously by the title of this review, my opinion of the film will be for the most part favorable.  The movie has two main intersecting story lines; that of the "basterds", a group of Jewish-American soldiers who kill Nazis in France, and one that follows Shosanna Dreyfus, a Jewish girl who escapes execution, who later runs a theater where her story intersects with that of the "basterds".

In my opinion, the characters were played beautifully.  My typical complaint with Quentin Tarantino is his poor dialogue and somewhat redundant diatribes, but it seems that he had grown in this latest film.  Each character expressed themselves believably.  The Nazis were believably Nazis, the Americans were believably Americans, the British British, and so on.  Surprisingly, the movie was filmed in various languages as well.  Characters spoke German, French, English, and a little Italian, and when they were not speaking their native languages, they spoke with an accent, and when not speaking their native tongue, a reasonable explanation was given.  This movie was not filmed with a bunch of Shakesperean actors creating the next great masterpiece, but a multicultural cast, with the actors and actresses hailing from their character's respective countries.

I had only a couple complaints about the movie, but they are not really complaints, rather things I did not enjoy as much, but when edited in my mind, the movie would be perfect.  My complaint is with Tarantino's typical flourishes.  When the character Hugo Stiglitz is introduced, the movie cuts away, displaying in a huge font his name.  Although only a second of time, I found that this type of camp more akin to his movies such as the Kill Bills or Deathproof, but for this film, it seemed to diminish the quality of the film.  Minus the introduction text, this might have enhanced the movie, considering it was the only instance so it seems to stand out in my memory.

The second complaint I have is the separation of the movie into "chapters".  Unlike other films that seem to play out of sequence, this movie follows a coherent time line, but each section is titled, much like in Kill Bill, and is separated into five chapters.  Although it seems as though the chapters are independent of each other, with each building on the last, it seems as though the definition of the chapters become blurred further into the movie.  A simple "four years later" would have sufficed.

My last complaint would be the choice of using David Bowie's Cat People (Putting Out Fire).  I do not mind that the song is not a period song.  The majority of the music from the soundtrack consisted of spaghetti-western genre music, with the exception of a couple, and David Bowie's song being one of them.  Maybe it is a preference; I do not like that particular Bowie song, but I think another song would have been better suited.  To give you an idea, the song is played during a montage involving Shosanna preparing for the film premier that would be held at her theater.  Lyrically, the song somewhat captures the moment, although I am certain Tarantino would argue differently, but for me I just did not get it.

Minus my faultfinding, I had found the movie to be excellent, with perfectly timed, action, drama, suspense, and comedy, and would place this at the top alongside Pulp Fiction (not a big Reservoir Dogs fan, although I appreciate the film).
Posted by Kevin at 2:38 AM