Is Glenn Beck Lying About Cars.gov?

I had recently come across video from Glenn Beck's program where he discusses the cars.gov website, and in particular, the security statement posted when a dealer submits a transaction to the National Highway Traffic Safety Administration.

According to Glenn Beck, once you agree to the Privacy Act and Security statement, a warning pops up onto your screen. Beck prepares to give an online demonstration of the warning, having a camera pan onto the laptop screen while he waits for the warning message. Coincidentally, the website does not load the page and Beck has the producers pull up a quote of what is said on the pop up message. According to Fox News, the warning states the following:

This application provides access to the DoT cars system. When logged onto the CARS system, your computer is considered a Federal computer and is the property of the U.S. Government. Any or all uses of this system and all files on this system may be intercepted, monitored, recorded, copied, audited, inspected, and disclosed to authorized CARS, DoT, and law enforcement personnel, as well as authorized officials of other agencies, both domestic and foreign.

Glenn Beck had advised his viewers to not perform this test while he did it for you on television. Out of curiosity, I had decided to visit the Cars.gov website. It took me a while, but I had finally found it, after realizing that this link was only for dealers who were submitting the paperwork for an acceptable car.

I had read through the privacy and security statement and clicked on the "I agree" button to see what Mr. Beck was warning me not to do. The following screen appeared on my computer, and I have included a screen shot for those who wish to follow Glenn Beck's advice. You can even visit the page here. 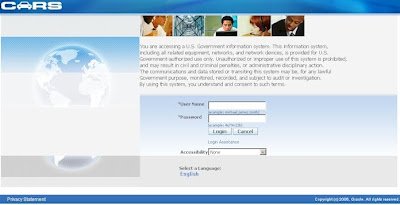 In case you can't read the screen shot, I have copied the text from the "warning" for all to read:

You are accessing a U.S. Government information system. This information system, including all related equipment, networks, and network devices, is provided for U.S. Government-authorized use only. Unauthorized or improper use of this system is prohibited, and may result in civil and criminal penalties, or administrative disciplinary action. The communications and data stored or transiting this system may be, for any lawful Government purpose, monitored, recorded, and subject to audit or investigation. By using this system, you understand and consent to such terms.

This warning is far different from the one that Fox News displayed on their screen, so this makes me question as to why, conveniently, Glenn Beck could not load the real screen, when it loaded on my computer rather quickly. I guess this can also feed into conspiracy theorists absurd beliefs regarding the Obama administration...

Here is the program of Glenn Beck, as found on YouTube, in case you missed it: