Feds Back Off Medicinal Cannibis 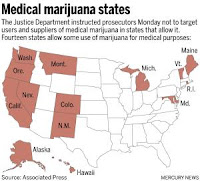 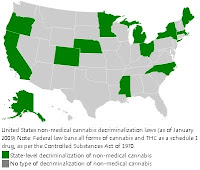 The Justice Department has directed agents to no longer raid medicinal marijuana farms, and to stop enforcing anti-drug laws on those who hold prescriptions, allowing agents to pursue more productive endeavors.  Although marijuana is still illegal, medicinal marijuana has now become decriminalized, and is a tremendous step in the right direction in the process of legalization of marijuana.  Valerie Corral, a founder of the Wo/Men's Alliance for Medical Marijuana, who was arrested a few years back for growing medicinal marijuana said "What's great about this is that the Obama administration is now speaking to the issue," adding "It's really quite remarkable — such a turn away from the Bush administration's zero-tolerance policy."

Although Obama has publicly denounced legalization, this newest move shows a shift in policy that closer resembles public opinion, and to advocates, full-on legalization is not too far away.  I for one am satisfied with this change.  I had recently established the website mumistheword.org, which promotes the legalization of marijuana for the sole purpose of funding universal health care, with the site's name Mum Is The Word based on an acronym, Marijuana For Universal Medicine, which also is a reference to the taboo nature of discussing drug policy.

What I look forward to seeing are the savings, as well as the effects on other areas of the Justice Department, now that agents are not bogged down with enforcement of anti-drug laws in states that allow marijuana for medical use.