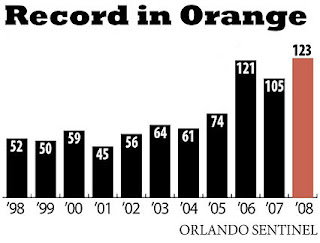 According to Neighborhood Scout, Orlando is safer than 1% of the nation's cities, with almost quadruple the national median of violent crimes per 1000 residents...

Knowing this, would you still take you family to Disney? Most people still come to Orlando, despite the statistics...

I mention this because of Fox News' push describing Chicago as a corrupt, crime-ridden, American city not worthy of the Olympics.  I haven't seen any outcries from the conservative station to warn parents about bringing their children to Orlando, but then again, doing so would not be politically advantageous.

Chicago has had many famous politicians in the past, but Fox News has their scope set on President Obama, who was previously a senator representing Illinois and a state senator representing Illinois' 13th district.  Because of Obama's previous tenure in Illinois state politics, this makes him corrupt, and part of the liberal machine.  This guilt by association and loose associations is nothing new to Fox News or many of the other conservative pundits out there; watching Fox News is like playing Six Degrees of Barack Obama, with the winner linking him to the most corrupt person with the least amount of connections.

Because Obama is from Chicago, and because Chicago was a candidate for the 2016 Olympics (until earlier this morning), Obama supported the idea of America hosting the Olympics, much like President Bush had done during his term, but that doesn't matter.  Obviously Obama was supporting Chicago's candidacy to pay back former political allies, and to pass on government contracts to his buddies in Illinois.  Obviously Obama and his corrupt administration were behind the whole Chicago 2016 plot, and had even gone as far as to plan it years before he took office, which is nothing new for liberal subversives, as we have learned from Fox's conspiracy specialist Glenn Beck.  Liberals are prone to taking their time penetrating the government, and have done so for the past 100 years, in order to spread their Marxist ideology.  It was only a matter of time before Beck's chalkboard linked the land deal Obama had in connection with corrupt businessman Tony Rezko, with the building of the Olympic village (Glenn Beck, if you decide to make this association, I would like to get the credit).

Fox News must have been short on real news, otherwise Glenn Beck would have reported on some other mid-level administration official instead of ranting about the Olympics and going on some weird tangent about "social justice" and what would Sotomayor do (WWSD)...
Posted by Kevin at 3:33 PM