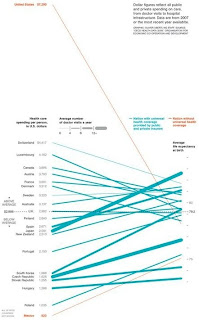 I was almost surprised when I had come across an article on Andrew Breitbart's Big Government, which appeared to be discussing how America is overpaying for healthcare and not reaping any of the rewards, mainly an extended lifespan, but my doubts were correct.  The website quickly went on the attack.

Using a graph Andrew Sullivan posted on the Atlantic's website from National Geographic, the graph illustrates how the United States of America pays roughly twice the average costs for health care but has a lower then average lifespan, especially when compared to nations with universal health coverage.  The author of the article, Dan Mitchell, who is of the CATO Institute, attempts to make the point that chart is misleading, not taking into account the reasons why American's lives are shorter then those with universal coverage, most notably citing car crashes, homicides, and obesity, although I would believe the latter to be increasingly related to health expenditures.  If you consider the scope of it all, Mitchell proposes that our lives are cut short by a couple years not because of inadequate care but because we crash our cars, kill each other, and eat way too many cheeseburgers and fries, but would those things also occur in other nations, effectively balancing out the figure?

Countries with universal coverage below America on the chart are former Soviet states, with the only other nation without universal coverage on the graph being Mexico, which pays roughly 11% of what America pays for health care but with Mexicans living only 4 years less.  They are joined below America with Poland, Hungary, Slovak Republic, and South Korea.  A better argument against this chart would be that the illustration does not represent enough nations without universal coverage but maintain high life expectancies, but that is not the point of the Mitchell article.  Instead, it argues that the graph is inaccurate and that the reason why American health care costs are out of whack are because of the increase of third-party payers. Mitchell states that "when people are purchasing something with (what is perceived to be) other people’s money, it’s understandable that they don’t pay much attention to cost." He accompanies this thought with a homemade graph showing the rise of third-party payers, showing that because consumers only directly pay for 12 percent of health care costs, consumers obviously don't care where the remaining 88 percent come from. The only problem with this thought process is that if reforming health care under the Obama administration means higher costs and adopting universal health care would be detrimental to the American system, then why are our European counterparts paying less and getting more for their money? How come costs didn't explode under their system?

Mitchell cites as reference a YouTube video of his as proof he is right (reminiscent of fellow Big Governmenter Jim Hoft), but it seems as if he is bashing the figures on the right of the chart while completely ignoring those on the left - I guess some more of that deceptive conservative journalism, right?
Posted by Kevin at 6:14 PM