Liberal media bias? Eric Boehlert discusses the myth of Obama's "falling poll numbers," as constantly portrayed in the media, in his column today, and how the media is continually adding to the conservative narrative by discussing Obama's dire straits, while poll numbers have been static over the past year.  Boehlert writes: 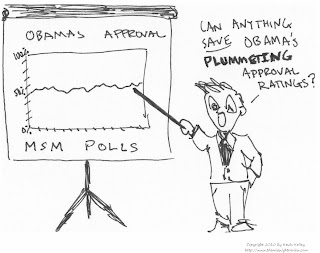 Has there been any dramatic shift in President Obama's approval number since late last summer? No. (See below.) Has the press in recent months, busy echoing right-wing falsehoods, often pretended that there has been a sizable shift? Without question. (Rush Limbaugh, last month: "If Mr. Obama hasn't noticed, his approval numbers are in a free fall."