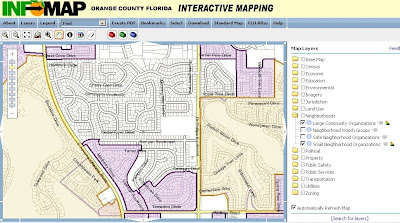 An easy way to review data about your local government is to check out what is called a Geographic Inormation System, or GIS, which can contain overlays that are placed ontop of a map to give a visual representation of things such as school board districts or drainage basins.  Orange County, Florida, has one such GIS, and upon checking it out, I had discovered that there was a layers folder titled "Neighborhoods", with four categories within, two of which caught my interest - Large Community Organizations and Small Neighborhood Organizations.
When selecting the two layers, it places over a map of the region a colored in region that depicts existing homeowners associations.  This had caught my interest because, as anybody who had read my numerous posts regarding the homeowners association called Sand Lake Hills Homeowners Association, Inc. (formerly Sand Lake Hills Section 2, Homeowners Association, Inc.) (SLHHOA) that has had an almost decade long campaign to make it the official HOA of the surrounding subdivisions.  According to the county GIS, the geographic boundaries of the SLHHOA are limited to Section 2.  The neighborhood depicted on the map that is beside Section 2 is Section 1, which is also known by it's neighborhood name, East Bay. East Bay's original corporate name was the Sand Lake Hills Property Owners' Association, Inc. before their name change in 2001, at which time the SLHHOA complained that they were not allowed to change their name because they were part of Sand Lake Hills in a September 2001 newsletter article titled "Hey! When Did We Change Our Name?"

I'm sure many of you have noticed the name change for Section One; they have decided to call themselves East Bay. They have also changed their corporation name from Sand Lake Hills Property Owners to East Say, a simple task; all you do change your name when you file your yearly paperwork. When I called Orange County asking about this new development I was told that they don't care what a subdivision calls itself. I pointed out that it would be a mess when property was transferred to a new owner because the previous deed states that the property is Sand Lake Hills, Section One or if someone tried to look up the subdivision under a search since a East Say already exists in Winter Garden. They agreed that this makes life difficult but all they need to know is the plat number ... how many of you know your plat number?? Hmm??

This is amazing to me. I've seen subdivisions change their names in the preliminary subdivision process, before lots are sold, but an established subdivision (1973)? When I pressed on, stating this was not an entire subdivision but a single section that shared common entranceways, their answer was the same ... we don't care what a subdivision calls itself. It was apparent to me that they missed the point; this was not an entire subdivision changing its name. After 3 days of doing the County phone game with the property appraiser, planning, zoning, etc., I found out a few things, I the County gets annoyed if you ask a lot of questions, especially if this is something that they do not deal with on a daily basis or choose not to deal with, I had a lot people tell me, "See. I don't know what the policy is (obviously there is not a policy), we've never had this brought to our attention beforehand We are on our own on this one. And, #3 the County really doesn't care what a subdivision or in this case, a section calls itself and how that Impacts the surrounding folks. A resident of East Say tells me that their board told them that this was done to increase their property value. I checked this out with some Realtors who thought that was amusing.


Our concern with this change is the entranceways, especially the Apopka-Vineland and Banyan entranceway. Section One has five homes on that entranceway; the balance of homes is section 4. Our attorney was amazed that they did not even notify us. We feel that the Apopka Vineland / Banyan entranceway should be Sand Lake Hills. We would like to change the sign, utilize the electrical hookup and landscape it. Our attorney is checking into this possibility. We should have an update by our meeting.

With that being said, it would appear that the SLHHOA has been operating off an incorrect perception of the covenants and restrictions for every subdivision, and that their attempt to impose their will over every section is inherently wrong. It makes sense that they would believe East Bay is part of them, despite the existence of a separate non-profit corporation that has been governing since before SLHHOA came into being, because the vice-president of SLHHOA is not a resident of Sand Lake Hills at all, but of East Bay.


According to the GIS, "the Orange County GIS Division created or acquired the included data from various public sources and can assume no responsibility for its accuracy," but based on every document I had read in relation to Sand Lake Hills, the only document that is contrary to the county's information is the amended and restated covenants, and that in itself is contrary to the original covenants and restrictions, which were filed legally with the county.