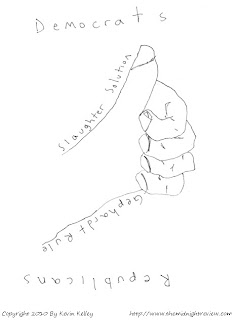 In the weeks prior to the coming vote for health care reform, conservatives have made every argument against the pending legislation, but conservatives fail to acknowledge their hypocrisy, and instead take a different point of view - that of the circumstantial constitution.

Most recently, Democrats have been coming under fire from the right for the use of a legislative procedure popularly known as the "self executing rule," or as conservatives call it: the "Slaughter solution." The interesting thing is that Republicans have used a procedure in the past, called the "Gephardt rule," after its author, former Representative Richard Gephardt.

According to a Congressional Research Report, under House Rule XXVII, "a joint resolution specifying the amount of the debt limit contained in the budget resolution automatically is engrossed and deemed to have passed the House by the same vote as the conference report on the budget resolution, thereby avoiding a separate vote on the debt-limit legislation." The Slaughter Solution is similar.

The problem is not that Republicans have used this method in the past, but that they believe when they used it, it was okay, but if the Democrats are to use it, it would be constitutional. According to Andrew Hyman at Red State, it's no big deal that Republicans used the self executing rule that they are now complaining about. Hyman writes:


It’s true that the GOP has used “deem and pass” before. Big deal. I’ve used a gun before, but that doesn’t mean I fired it like the maniac from Fort Hood. When the GOP used “deem and pass,” that was done legitimately. In contrast, the imminent “Slaughter Solution” would use “deem and pass” in a completely unconstitutional manner.

This would be like making the argument that the 26th Amendment was only intended for certain citizens over the age of 18.

While Republicans have constantly attacked Democrats, incorrectly claiming that the bill would pass without a vote, they also argue that the reason behind this is to protect the legislators from the possible backlash at the polls later this year, but that would be ridiculous considering both the Speaker and the President have come out stating they don't care what happens in November - they just want the legislation passed.

The Republicans should really be careful about publicizing their discontent and attacking every little aspect of the legislation because chances are, they will use the same maneuvers in the future, and hopefully, they will be called out on their hypocrisy. The Republicans have worked the mainstream media with virtual immunity. Thank god for Media Matters For America.

While reports indicate the Democrats have dropped the Slaughter solution, the right-wing reports have pretty much dominated uncontested. Lets just hope the Democrats get the votes they need to pass this legislation. Then the spin cycle should explode! Conservatives should be careful in what they choose to be unconstitutional. Apparently, in their eyes, everything GOP has been handed down by the founding fathers while the Democrats have gotten a playbook from Chairman Mao.

Check out some more of the right's lies here.
Posted by Kevin at 6:47 PM