From an article by Charlie Savage of The New York Times:


Nine members of a Michigan-based Christian militia group have been indicted on sedition and weapons charges in connection with an alleged plot to murder law enforcement officers in hopes of setting off an antigovernment uprising.

Eight of the defendants were arrested over the weekend in raids in Michigan, Ohio and Indiana. A ninth remained at large, the Justice Department said. The indictments against them were returned last Tuesday. The defendants were identified as members of Hutaree, described by federal prosecutors as an anti-government extremist organization based in Lenawee County, Mich., and which advocates violence against local, state and federal law enforcement. The group saw local and state police as “foot soldiers” for the federal government, which it viewed as its enemy, along with participants in what they deemed to be a “New World Order,” according to the indictment. 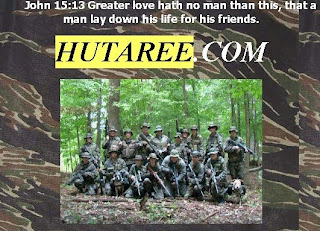 “This is an example of radical and extremist fringe groups which can be found throughout our society,” Andrew Arena, an F.B.I. special agent in charge in Detroit, said in a statement. “The F.B.I. takes such extremist groups seriously, especially those who would target innocent citizens and the law enforcement officers who protect the citizens of the United States.”

A Web site for the Hutaree group talks about a coming battle against the putative forces of the Antichrist but does not appear to focus explicitly on recent political events.

The Web site, which describes the group as “preparing for the end times,” featured video clips of people running through woods in camouflage gear and firing assault rifles, along with links to gun stores and far-right media. It also features an elaborate system of military ranks for its members. The site says it coined the term Hutaree, intended to mean Christian warrior.

Considering the language heard from the conservative media and right-wing opinion shows, such as Fox News' Glenn Beck, and recent acts of violence targeting Democratic legislators over the passage of health care, it would be my opinion that incidents, such as this, will only increase in frequency over the coming months. While Democrats have been warning of such dangerous rhetoric for months, Republicans scoff at the idea that they are the ones fanning the flames of discontent, despite constantly seeking Tea Party approval - the Tea Parties typically encompass the far right fringes and lend credence to extremist beliefs while maintaining connections with national organizations such as the Republican party.

It is only a matter of time before the right wing media start to try and pass this fringe militia as a leftist group or dismiss the arrests as an isolated incident.
Posted by Kevin at 5:54 PM