I have posted numerous times about how conservative John Smithson improperly cites other's works on his own website, misrepresenting the information, sometimes giving the appearance that it is his own.  A couple days ago, Smithson came on this site claiming he did nothing wrong and that he maintains a "high standard" when it comes to posting.  Here is some more of my "cut and paste tripe" that illustrates Smithson's impropriety.

John Smithson cited Jeffrey Sachs from The Financial Times three days ago, copying the entire article from beginning to end, including the footer.  Check out the comparisons between Smithson's page and the Financial Times page below: 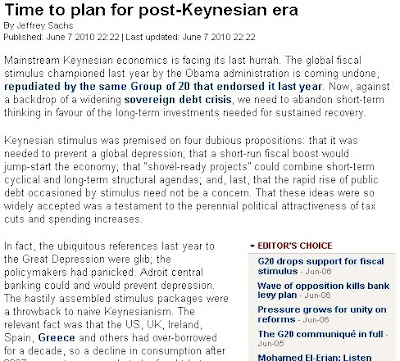 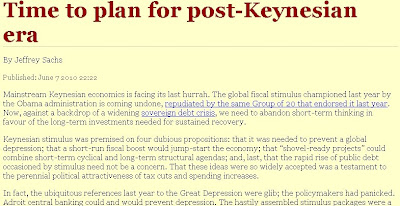 Now check out the footers:

Notice something?  How about the part where The Financial Times specifically ask people who use their articles to not "cut" them and "redistribute" them by posting to the internet, which is exactly what John Smithson has done.  Smithson failed to even read the "copyright" information that could be accessed by the link that he copied, but don't worry Johnny - I read them.

According to The Financial Times, "you may not copy FT content from FT.com or any third party source of FT content such as news aggregators and you may not republish or redistribute full text articles, for example by pasting them into emails or republishing them in any media, including websites, newsletters or intranets. Full text means the whole article."

What else does The Financial Times have to say?  Check out these frequently asked questions regarding copying material:


I thought that as long as I linked back to your website or published an attribution, that there are no restrictions on how I can use your content?

This is not correct. Merely providing a link or an attribution is not a defence to copyright infringement.

Why does it matter if I copy FT content without permission?

Unauthorised copying is a way of avoiding paying for the value you are gaining by using the content. We make a significant investment in creating FT content to deliver value to you and to make a return on that investment. If we are unable to protect that investment by licensing our content and collecting revenue, then it threatens our ability to continue to create the content.

Seems pretty clear if you ask me.  How come John Smithson violated The Financial Times terms of service and copyright law?  Smithson may view this post as being petty but this is just another example of his misuse of others works.

I wonder what Jeffrey Sachs or The Financial Times have to say about Smithson's misuse.

Because John Smithson has felt my previous articles were insignificant and he failed to acknowledge any wrongdoing, I have decided to contact The Financial Times and inform them of John Smithson's copy and paste job to see what they think of the matter.  Here is the email I sent:


It has come to my attention that a blog by the name Midknight Review has copied an article by Jeffrey Sachs from June 7th, 2010, on June 7th, 2010, in its entirety, including links to The Financial Times copyright page.

Here is a link to the blog in question:
http://jds-midknightreview.blogspot.com/2010/06/following-article-from-financial-times.html

I'll keep everyone updated on any response I receive.

John Smithson has showed a disregard for other people's works, taking a typical conservative activist approach to doing things, ignoring rules and regulations to advance his agenda.  The content of Sachs' piece may support Smithson's message, so instead of properly acquiring the rights to the article, Smithson just cuts and pastes to his website.

Smithson wrote in a response to my article pointing out his improper citation of a Daniel Klein piece that my constant writing about his copyright infringements were a waste of time, proving the point in the Klein piece that "liberals are poorly informed as they compare to conservatives."  Smithson also wrote in response to that article of mine that a "constant and factual barriage of information is what wins the philosophical battles."  I assume Smithson meant "barrage," but putting spelling errors aside, I would like to point out that time and time again, I have offered plenty of supporting evidence and factual information in my claims regarding Smithson's website, yet Smithson still argues that there is nothing wrong with what he does.  I wonder what he will have to say in response to this article, which is rather explicit in regards to the use of copyrighted information.

As we have seen in the past, when his copyright infringements and improper citations have been identified, Smithson ignores the claim and then attacks the accuser - a strategy right out of the conservative activist handbook.  We've seen similar methodology acted out by other conservative activists like propagandist James O'Keefe, who has used illegal methods to acquire his allegedly damning pieces, which really amount to a bunch of heavily edited videos depicting his targets in a negative light.

Update - Darren Jay of The Financial Times has forwarded my inquiry to the appropriate department...
Posted by Kevin at 12:06 AM