Sharron Angle Hypocritically Claims She Will Be "Mainstream" If Elected

This is very interesting - Nevada Republican U.S. Senate candidate Sharron Angle told CNN that if elected, she will "be a mainstream Senator."  This claim is a bit ridiculous when considering the issues she has campaigned for and the headlines she has made in the past regarding her political beliefs.

Just looking at her campaign website, I can see a couple views that need some tweeking to make Angle more mainstream, like her desire to "repeal and replace Obamacare" - a recent study had shown that 50 percent of Americans have favorable opinions of the reform bill and only a minority seek to repeal it - of those with negative views of the bill, 7 percent believe the law should stay, putting the total of those who do not want anything done at 57 percent.

Angle also states on her website that she is for the protection of Social Security, by returning money back to it's trust fund and placing it into a lock box, but she also wants to establish personalized (or privatized) accounts for the next generation, but how can Social Security remain solvent if you are to remove future generations from contributing?  More Americans support the ellimination of income caps on Social Security taxes and prefer Social Security to remain government-run.

How about Angle's position on gay marriage?  According to her website, she had "worked to pass the Constitutional Protection of Marriage Act in Nevada, which defines marriage as between one man and one woman," but according to a recent poll, support for gay marriage is on the rise, with again only a minority of the population sharing Angle's views.

In regards to abortion, Angle opposes abortion under all circumstances, which is yet another position held by a minority of Americans - a recent Gallup poll places those like Angle amounting for 19 percent of the population. 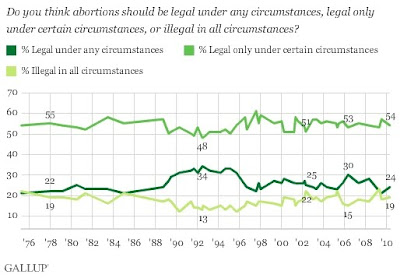 Basically, if you look at these four issues - health care reform, gay marriage, privatization of social security, abortion - it appears that Angle is not mainstream at all, so why would anyone believe she would become a "mainstream senator" if elected when she is still campaigning on minority-held opinions?
Posted by Kevin at 4:25 AM