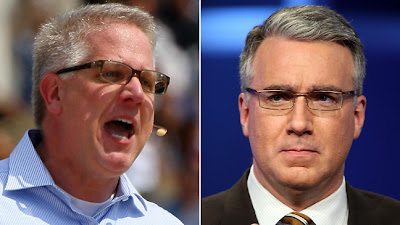 Conservative media has been pretty hush regarding the abrupt exit of MSNBC host Keith Olbermann, but Fox News propagandist Glenn Beck was quick to make a comment, speculating as to why the rival pundit left his job.

Conservative pundit Glenn Beck said Monday that Keith Olbermann's departure from MSNBC was due to the fact that the Countdown host was difficult to work with.

This ultimately finished off Olbermann’s stint in Beck's view.

"You can handle mediocre ratings if the guys is not a total pain in the ass," Beck said. "But from every indication Keith Olbermann is the biggest pain in the ass in the world."

"He was impossible to work with," Beck added.

Conservatives originally reacted quietly to Olbermann's surprise departure on Friday. But the noise is starting to pick up.

Beck said he personally enjoyed Olbermann's show. "I kind of like the easy competition," he said.

Beck also insists that Olbermann was "easy competition," but when you compare ratings of the two stars from late last year, Olbermann's performance was not to shabby - close to 1.1 million to Beck's 1.7 million.

While Olbermann may or may not have been difficult to work with, Beck just uses this latest event to make an easy jab at his competition and to draw attention away from his sagging ratings - Beck's show has been bleeding viewers for over a year.

The 5pm hour of CNN’s Situation Room also fell, but not as much as Glenn Beck. The 5pm hour of Hardball w/ Chris Matthews was up vs. last October, rising 8% in adults 25-54, and 6% in average viewership.

His numbers continued to drop - he had over 2 million nightly viewers late last year, but as we see above, that number dwindled to 1.7 million.  Its easy for Beck to call out Olbermann's lower ratings but considering the fact that while Olbermann may have had less viewers, he retained viewers, and that Beck has continually lost viewers in key demographics, it is safe to say that Olbermann was the better bet.

If Glenn Beck thinks he can steal some of Olbermann's viewers, I think he will be in for a rude awakening and should watch out for the rise of Rachel Maddow and Lawrence O'Donnell.

Also, with Olbermann's departure keeping him off the airwaves for several months, Beck may see new competition for his mediocre Huffington Post-wannabe website, The Blaze, should Olbermann decide to hit the internet with his own brand.
Posted by Kevin at 4:45 PM