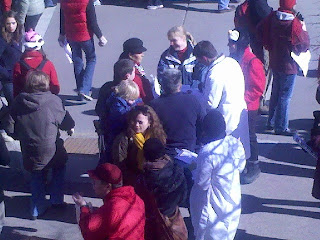 In the hurry to take sides in the Wisconsin protests, conservative propaganda website Big Government has obviously come out on the anti-labor side, but now they are swinging at anyone who seems to support the unions and workers - a recent article attacked doctors for handing out sick notes to public employees, encouraging readers to contact the state medical board to turn in doctors.


In this video from Josiah Cantrell, a licensed physician explains that his medical note is all the individual will need when he reports back to work. He also says that, if the person’s employer asks what specifically was wrong with him, it is “none of their freakin business.” We have to believe the state medical board is going to be interested in the doctors freely handing out fake ’sick’ excuse forms.

The story stems from a report by the MacIver News Service, a free-market, individual freedom, personal responsibility and limited government leaning news source,so objectivity is out of the question.

Also, this story has already made its rounds in the conservative media - Fox News released a story full of allegations, suggesting the doctors were not really doctors and that the notes were "fake.".


As thousands of protesters on both sides of an epic budget standoff in Wisconsin faced off Saturday at the Capitol, alleged doctors were handing out 'fake' sick notes to protesters -- allowing them to call in sick while the budget impasse continues.

Protesters told Fox News they obtained the notes from alleged doctors standing on street corners handing them out to whomever asked. The protesters said doctors did not examine or inquire about their current health condition before passing the notes out.

One note obtained by Fox News asked for the recipient's full name, birth date and estimated dates that they would be missing work. A request for identification to receive the document appeared only optional.

Why didn't Fox News do some investigations into these doctors to find out more information?  Why is a "news" organization alleging instead of investigating?

I immediately noticed one hypocrisy - conservatives are calling for people to report these doctors, or really any doctor issuing a note to a potential protester, to be reported to the state medical board.  What is funny is that doctors are licensed by the Wisconsin Department of Regulation and Licensing.

They are complaining about labor protests over legislation against public workers' benefits, and one of their solutions is to try and have other public workers crack down on supposed violators.

What is even more troubling is that these "news" sources seem to forget an important part of these notes and doctors consultations - doctor-patient privacy.

From an Associated Press article on The Huffington Post:


Doctors from numerous hospitals set up a station near the Capitol to provide notes to explain public employees' absences from work. Family physician Lou Sanner, 59, of Madison, said he had given out hundreds of notes. Many of the people he spoke with seemed to be suffering from stress, he said.

There is even a constitutional basis for such confidentiality:


The fundamental right to privacy, guaranteed by the Fifth and Fourteenth Amendments to the U. S. Constitution, protects against unwarranted invasions of privacy by federal or state entities, or arms thereof. As early as in Roe v. Wade, 410 U. S. 113 (1973), the U. S. Supreme Court acknowledged that the doctor-patient relationship is one which evokes constitutional rights of privacy. But even that right is not absolute and must be weighed against the state or federal interest at stake.

Also, consider the hypocrisy of those on the right - Rush Limbaugh has obviously come out against the Wisconsin protesters, calling them "parasites," but remember when Limbaugh got into a little hot water for feeding his drug addiction and buying pills from his housekeeper?  Forgetting the hypocrisy of Limbaugh's drug use and constant on-air attacks against illegal substances, when the state of Florida wanted to investigate as to whether or not Limbaugh was doctor shopping, Limbaugh's lawyers claimed doctor-patient confidentiality.  As a side note, that was another story the National Enquirer broke that turned out to be true.

Are these notes fake?  I would consider them to be legitimate - those participating in the protests may be stressed by the right wing proposals which will greatly impact their employment and economic situations.  Critics of the protesters and the doctors handing out notes are just upset that there are more pro-labor protesters then tea partiers so they are trying everything in their playbook to come ahead.

If the right really want their claims to carry more weight, they should do more then take a couple snapshots and videos of people handing out doctors notes and they should do the jouranlistic legwork, including but not limited to interviewing everyone, including the doctors handing out the notes, but if they did that, some other "news" agency may come in and scoop their story, so instead of ensuring quality, they rush it to the internet so their readers can be the judge, and sadly, as we have seen with ACORN and Planned Parenthood, the readers make poor judges - which makes me worry about national jury pools (especially in red states)...
Posted by Kevin at 10:49 AM