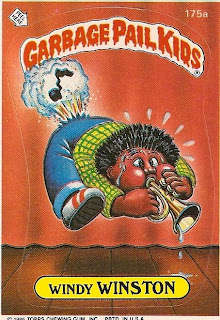 I loaded up Big Journalism today and saw a big headline from Dana Loesch claiming AlterNet called Herman Cain, the black conservative who recently announced he had formed an exploratory committee for a potential run as the Republican nomination for the presidency, a "black garbage pail kid" and a "monkey."

Being that the claims came from Big Journalism, I decided to explore such accusations and place them into context.  To sum things up quickly, the author of the AlterNet piece, Chauncy DeVega, was making a point - Republicans have presented the world with Herman Cain as a gimmick.


Instead, Herman Cain’s shtick is a version of race minstrelsy where he performs “authentic negritude” as wish fulfillment for White Conservative fantasies. Like the fountain at Lourdes, Cain in his designated role as black Conservative mascot, absolves the White racial reactionaries at CPAC of their sins. This is a refined performance that Black Conservatives have perfected over many decades and centuries of practice.

Let’s consider the routine. First, Cain enters the stage to Motown music. Then Cain feigns swimming after rolling up his sleeves to show them his black skin and how he is a hardworking negro (not like those other ones). Cain bellows in a preacher affected voice and channels the folksy negro down home accent of his late grandpappy. In the money shot, Cain gives the obligatory “black folks who are not Republicans are on the plantation” speech to the joyous applause of his White benefactors. And he doubles down by legitimating any opposition to President Barack Obama as virtuous and patriotic regardless of the bigoted well-springs from which it may flow.

In total, CPAC is a carnival and a roadshow for reactionary Conservatives. It is only fitting that in the great tradition of the freak show, the human zoo, the boardwalk, and the great midway world’s fairs of the 19th and 20th centuries, that there is a Borneo man, a Venus Hottentot or a tribe of cannibals from deepest darkest Africa or Papua New Guinea on display. For CPAC and the White Conservative imagination, Herman Cain and his black and brown kin are that featured attraction.

DeVega's argument is one similar to the election of Michael Steele as chairman of the Republican National Committee back in January of 2009 - Steele was akin to using race to point out that not all black people were Democrats.

How is DeVega's comments any different from when Michael Steele said he would woo black voters to the Republican party with "fried chicken and potato salad?"

Using Loesch's logic, Steele was saying black people need to be lured into the Republican party because they are not capable of making smart, rational arguments to decide on the benefits of conservatism.

What about an interview between Loesch and Andrew Breitbart, where they claimed Shirley Sherrod was caught on video being racist at a NAACP event (they both agreed it was "evidence").  That video turned out to be heavily edited, but that didn't stop Breitbart and Loesch from using it to defend against accusations directed towards the tea party.

I want to point out another Loesch article written in October of 2010.  In it Loesch makes the following statement against the NAACP: "The NAACP is back again with yet another attempt to defame and smear the multicultural tea party movement."

I thought this quote was interesting because another black conservative, Allen West from Florida, praised diversity yet attacked multiculturalism in his CPAC speech, stating we should "never allow multiculturalism to grow on steroids and define itself as making American culture subservient."  Breitbart's other website, Big Government, had also written numerous articles against the concept of multiculturalism.  Andrew Mellon wrote wrote a piece for the propaganda site equating multiculturalism with "moral relativism," and then stated that it was a tool used by "Liberals, progressives, socialists, statists, communists," as well as all other "enemies of civilization."

Is Loesch for multiculturalism or against it?

Loesch mischaracterized DeVega's piece by claiming he called Cain a "black garbage pail kid" or a "monkey" - in reality DeVega used the term "garbage pail kids" as a substitute for "conservatives."

She even took a whole bunch of quotes from his article (out of order) to try and prove her point - kind of like Lila Rose chopping up the audio of her videos to make it seem the videos proved something.

So, wy exacly is Loesch mad?  Is she overcompensating for something?
Posted by Kevin at 10:42 AM