From an article at The Huffington Post by Michael R. Blood:

Cheney's comments came a day after President Barack Obama pressed Mubarak to consider his legacy and exit office in a way that would give his country the best chance for peace and democracy.

Cheney said the U.S. should take measured steps in public, and suggested that too much pressure could backfire.

"There is a reason why a lot of diplomacy is conducted in secret. There are good reasons for there to be confidentiality in some of those communications. And I think President Mubarak needs to be treated as he deserved over the years, because he has been a good friend," Cheney said at an event commemorating the centennial of President Ronald Reagan's birth...

"He's been a good man, a good friend and ally to the United States," Cheney said. "We need to remember that."

Why is this important? 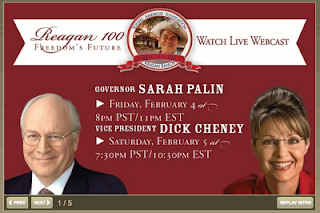 Cheney made these comments in an address to the Young America's Foundation.  Sarah Palin spoke to the group on Friday.  During Palin's speech to the group, she claimed America wis out of touch with the values of conservative Ronald Reagan.


"This is a time for choosing again, and the vision we outline here is just as stark as it was in 1964. But we must look over the horizon, as Reagan did. We must see where these unsound policies will ultimately end, and that's in decline and defeat," she said.  "We could choose one direction or the other, socialism or freedom and free markets."

Blood points out in another article just how contradictory and wrong Palin's statements at the event were:


Palin, who now is closely aligned with the tea party movement, has become for some a polarizing political figure.

Tea partiers rail against soaring public debt and sprawling government programs like Social Security and Medicare. But public debt roughly tripled on Reagan's watch and he did not attempt to dismantle Social Security or Medicare during his term, says Reagan biographer Lou Cannon.

"He was no tea partier," Cannon says.

So, what is the importance of both Dick Cheney and Sarah Palin's Young America's Foundation speechs?

Dick Cheney pals around with dictators and Sarah Palin believes a president who raised debt, protected entitlements, and lowered taxes did the exact opposite, and then insists it is America that is out of touch with conservative philosophy.

A vast majority of Americans want the policies Palin rails against and they support change in the Middle East, but they are the ones that need to change?  While I agree with some of what Cheney said about diplomacy, to call Egyptian Dictator Hozni Mubarak a "good friend," and for Palin to play on the mythology of one of America's presidents seems greatly out of touch with American values.  Palin claims to be a good little Christian, yet she loves to overlook some of the Ten Commandments - in particular the one about lying.
Posted by Kevin at 9:51 AM