Fox Tries To Shoot The Messenger 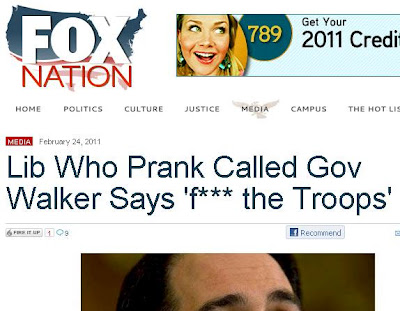 Wisconsin Governor Scott Walker got into some trouble by falling victim to a prank call (more on that in a later post), in which he divulged deceptive strategies and a willingness to take bribes from billionaires, but it is the media's response to this prank call that I found interesting, more so the subsequent responses from Fox News.

In a Thursday article on Fox Nation, there is reference made to a Daily Caller article by Matthew Boyle, attacking the prankster, editor for online newspaper The Beast, Ian Murphy, calling the newspaper editor a blogger (that only seems to be an insult when you oppose a conservative view point) and referencing past articles with such inflamatory titles as "Fuck The Troops" in an attempt to discredit the contents of the call.


The Buffalo Beast blogger who prank-called Wisconsin Republican Gov. Scott Walker, falsely posing as billionaire David Koch, has written some edgy — some may say offensive — articles in the past. For the publication he edits, Ian Murphy has written such pieces as “Fuck The Troops,” a dissertation explaining why he thinks, “the nearly two-thirds of us who know this war is bullshit need to stop sucking off the troops,” and “Let There Be Retards,” an exclusive look inside a Kentucky creationism museum – while Murphy was falsely pretending to have Asperger’s Syndrome.

It is interesting that Boyle would call into question Murphy's "journalistic past" when people like Boyle have come to the defense of pretend journalists like Lila Rose and James O'Keefe - in a February 22nd article by Kristan Hawkins on the Daily Caller, which by the way is also an online publication, Hawkins called for the defunding of Planned Parenthood because of the revelations from Rose's highly edited smear videos.

In the past decade, Students for Life and other activists like Lila Rose, President of Live Action and a former SFLA intern, have worked to prove to Americans that Planned Parenthood should not receive our money to kill and wound over 300,000 preborn children and women each year.

While Murphy's past is called into question by those on the right, the pasts of conservative activists are not.

Websites like The Daily Caller have an agenda, and they don't try to hide it.

"Defunding Planned Parenthood is at the top of our list as pro-lifers," wrote Hawkins.  "For if we can defeat this organization, we will be able to bring down the largest abortion provider in America, stop Planned Parenthood’s preying on young women, and save hundreds of thousands of preborn lives."

What makes this worse is Fox, which claims to be fair and balanced, cites these highly biased sources as a way of presenting fair "news," while at the same time attacking the "mainstream media" for not reporting on the same, unprofessional, unethical, opinionated stories.  By the way - those stories also attack the mainstream media.  Just look at Boyle's comments about "mainstream publications" ignoring Ian Murphy's other works.
Posted by Kevin at 8:32 PM