In recent weeks, Planned Parenthood had disclosed to the public that unnamed individuals had entered several of their locations asking questions similar to those asked by conservative activists James O'Keefe and Hannah Giles in their heavily edited videos "catching" ACORN employees supplying advice to a supposed pimp and prostitute on how to evade taxes and traffic underage South American girls.  In these most recent videos targeting Planned Parenthood, the group releasing the videos, Live Action, claimed the Planned Parenthood employees helped cover up a prostitution ring so that prostitutes could receive health services.

Planned Parenthood released a statement detailing its coordination with state and federal authorities, stating that the FBI had been collecting data on atleast one of the individuals claiming to be a sex trafficker.

Live Action was founded by Lila Rose, a one-time accomplice of James O'Keefe - the two targeted Planned Parenthood before, attempting to donate money to the organization for the sole purpose of aborting black babies.  It was during the work aganist Planned Parenthood that James O'Keefe declared that activists had to create their own media and control the news, which is exactly what Rose's organization is doing, following her former partner's footsteps - the only problem being Planned Parenthood, unlike ACORN, was prepared for these traps and notified the media explaining they were the possible victims of anti-abortion activist stings.

"Falsely claiming sex trafficking to health professionals to advance a political agenda is an astoundingly cynical form of political activity," he said. 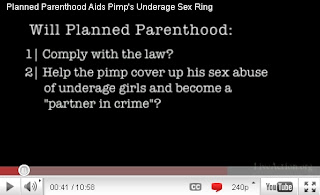 We know that since Planned Parenthood contacted authorities, they had decided to "comply with the law," but Rose already had her conclusion before she even recorded her video.

As the video progressed, the Planned Parenthood employee stressed they wanted to help - with medical services, not the prostitution ring - but what is curious is what exactly did Rose expect these employees to do?  Did she expect them to confront the pimp in their offices and perform a citizen's arrest?  Instead, the employees conducted the meeting and then contacted the law.

While Rose and her new accomplices were caught on tape falsley admitting to a crime, since their targets were in New Jersey, unlike the similar ACORN stings, it appears they did not violate the states wire-tapping laws, but it is still uncertain as to what kind of legal action Planned Parenthood may take against the group.

James O'Keefe wrote the following in regards to the last Planned Parenthood undercover operation he was involved in with Rose:


Leaders taking on power structures need to be raw, confident, fearless and impermeable. Lila received a letter threatening to prosecute the group for violating wiretapping laws, but it did not stop her from continuing the investigation. After the investigation aired nationally on Fox News, Planned Parenthood could no longer press charges, as Lila would appear the victim.

He also stated that even though their methods may be unethical, they consider their beliefs to be morally sound and so their actions are subsequently justified.

Like many other conservative activists, Rose may just as well play the victim card publicly on sympathetic media outlets like Fox News or Andrew Breitbart's websites, and if Planned Parenthood proceeds with any sort of legal action, Live Action may counter by claiming such action is intended to silence them and keep the truth - Live Action's truth - from being aired.

Jed Lewison made the following observation for Daily Kos:


Rose isn't going to get anywhere with her fraud. The only question is which is worse: falsely accusing Planned Parenthood of complicity in a child sex ring or forcing authorities to divert resources from pursuing real crimes while they investigate whether her hoax was, in fact, a hoax. Either way, the only thing her actions accomplish is to further discredit the playbook of clowns like Andrew Breitbart.

He also wondered how long it would take for conservative lawmakers to fall for this latest hoax perpetrated by right-wing activists.