I just wanted to point out a couple things about the whole Live Action anti-Planned Parenthood video stings: 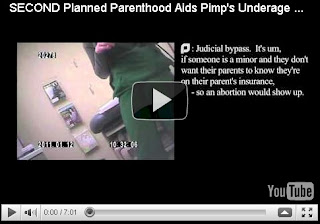 “Planned Parenthood’s problems go far beyond New Jersey. Our new video shows their Richmond clinic willing to aid and abet the sexual exploitation of minors and coaching a pimp about how girls as young as 14 – 15 could circumvent parental consent laws for secret abortions,”  said Rose.

“We are sharing the full Richmond footage and transcripts with Virginia law enforcement officials and we are formally asking Attorney General Ken Cuccinelli to conduct a statewide investigation of these heinous practices, just as the New Jersey Attorney General is opening her own investigation into Planned Parenthood’s compliance with the law in her state. Planned Parenthood needs to be held accountable,” Rose continued. 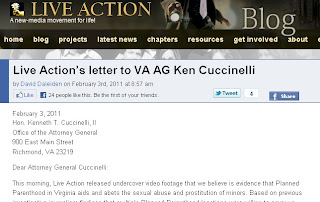 Lila Rose contacted the Virginia attorney general's office on February 3rd - more then three weeks from when she allegedly learned Planned Parenthood was "systemically" helping traffick underage girls.  Here are the contents of the letter:

So long as Planned Parenthood operates in such a reckless manner, young women and girls in Virginia are at risk of forced abortion and sexual exploitation. On Tuesday, Live Action released a similar undercover video in New Jersey. New Jersey Attorney General Paula Dow has begun an investigation into Planned Parenthood’s compliance with the law in her state, and we are asking you to do the same in Virginia.

We are including the raw video footage of the investigation that we released to media today. Please advise if we can support your own investigation in any way.

Virginia Attorney General later appeared on Fox News and responded with the following:

And, this is at a time that we are trying to deal with human trafficking. For a few years we have been trying to figure how to get at it. And, when you see something like this you can see how it can flourish. There are institutions already in place in Virginia and across America, Planned Parenthood in this case, who are happily willing to aid and abet that sort of effort.”

Now Rose insists that her investigations prove "blatant violations of Virginia law may well be occurring at Planned Parenthood facilities and affiliates in the state," but Cuccinelli clearly states no wrongdoing ever took place on video, yet because nothing illegal was captured on tape, he is lead to believe that there is a "willingness" from organizations like Planned Parenthood to break the law, so if both Rose and Cuccinelli believe their lack of evidence is proof something bad is going down, why did it take Rose more then three weeks to contact state authorities with her findings?  While it is clear there was no human trafficking, Rose's inaction is disgusting - she withheld serious information (in her eyes) from the law just so she can get the credit for the scoop and appear on Fox News.

Lila Rose was willing to let an organization aid and abet child prostitution rings just so she can get credit for blowing the whistle.

I wonder if Rose will confess to that, among other things, next time she goes to church, because after all, Rose claims to be a good little Catholic girl (and we know that stereotype).

Update - I thought this was interesting - Rep. Cliff Stearns wrote an article titled "Defund Planneed Parenthood" for Big Government on February 12th, in which he discusses why he believes funding for Planned Parenthood should be cut.

Thanks to Live Action, a group of young people dedicated to strengthening the culture of life, we learn from undercover videos that Planned Parenthood is all too willing to ignore the law in promoting its services, among them abortion.

Working with Live Action, a man and woman posed as sex traffickers at a Planned Parenthood center and asked about abortions and other services for their child sex workers. Instead being reported for what appeared to be a horrendous sexual exploitation of children, the pair received information on how to arrange abortions for their child sex workers.

This just adds to Planned Parenthood’s record of violating state sexual assault and child abuse reporting laws, and of encouraging young girls to lie about their ages to circumvent state reporting laws.

I thought Rep. Stearns comments derserve attention because earlier in this article, I had referenced comments made by Virginia Attorney General Kenneth Cuccinelli on Fox News, which was subsequently quoted on Big Government, in which Cuccinelli stated that there was no case to be made from Live Action's videos.

Maybe Stearns is taking the same position as Cuccinelli, claiming nothing illegal happened in the videos but Planned Parenthood is somehow involved in illegal activities not caught on film and he somehow knows something is going on, but this is highly unlikely being Stearns takes Lila Rose's doctored videos as fact.  If Stearns does know of illegal activities going on at Planned Parenthood, the same question regarding Rose's inaction applies to Stearns - why had he not approached authorities with his damning information...
Posted by Kevin at 1:10 AM