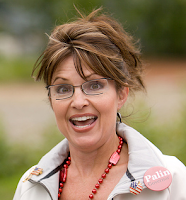 Warner Todd Huston got all upset recently when Time referenced a satirical work about Sarah Palin on their Celebrity Newsfeed - author of the Huston-hated article, Nick Carbone, later clarified that his sentence was a "tongue-in-cheek link to an article that was intended as a joke."

"And you thought Sarah Palin went overboard by commenting that she wanted to deport the singer?" wrote Carbone.

Despite Huston's inability to read a joke, I thought there was something very funny about Huston's stupid tit-for-tat post - Huston goes on to defend Palin against other supposed media injustices, by linking to an article he wrote claiming Rachel Maddow cited a satirical website, but again, Huston's whole argument is based on his failure to grasp the English language.

In the cited article from Christwire, Stephenson Billings wrote the following:


Governor Palin needs to speak out publicly and forcibly for an American-led invasion to protect our interests in North Africa. As the largest recipient of foreign aid next to Israel, the United States has a tremendous investment in keeping Egypt stable and relatively terrorist-free. There are many sympathizers on the ground who have not been able to express their allegiance to democracy and freedom for fear of repression by the rioters. The Governor could become the center of their rallying cries. Upon her direction, other Western nations are sure to join us. This is the pressure Obama needs to act. With the recent ascent of the Tea Party in the House and Senate, this decision would certainly gain Congressional support. Do we truly need another 84 million enemies of Christianity? Sarah Palin can head off this possibility in Egypt if she moves swiftly.

"Early in February, Maddow breathlessly reported that Palin wanted to send the U.S. military to strike Egypt at its time of turmoil," wrote Huston.

Here is a video clip of the comments made by Rachel Maddow:

Rachel Maddow even states that "to be clear this is what these folks are asking Sarah Palin to do and is not Ms. Palin's own idea."

Ignoring the satirical value of the Christwire article, there was some rather alarming accuracy considering it was written a week before Palin made comments suggesting America intervene in Egypt to prevent radical Muslims from gaining control of the government.  In an interview with the Christian Broadcasting Network, Palin criticized the Obama administration's handling of the events that had transpired in Egypt, and stated there were certain situations America should not allow to happen in a newly reformed Egypt.

"Is it going to be the Muslim Brotherhood," Palin asked. "We should not stand for that, or with that, or by that. Any radical Islamists. No, that is not who we should be supporting and standing by ... we need to find out who was behind all of the turmoil and the revolt and the protests so that good decisions can be made in terms of who we will stand by and support."

What does Palin mean when she said that America "should not stand for that?"  Would she support military intervention in preventing a supposed radical Islamic group from participating in a soverieng nation's elections?  Did Sarah Palin envision a future where Egypt, and its 84 million citizens become "enemies of Christianity" should the Muslim Botherhood, or any other Islamic group prevail in an election?

Sarah Palin also didn't get Carbone's joke, sending a poorly written note to Time Magazine, asking for a retraction for their lies:


Subject: Great job, MSM!
Jay - pls tell your bosses there at Time Magazine thank you for the invitations to attend the upcoming functions. I'll sure put a lot of thought into those invitations.

Then, have your editors retract Time's most recent ridiculous lies about me supposedly giving Sean Hannity a radio interview wherein I supposedly talked about Christina Aguilera (that I slammed her for her Nat'l Anthem mistake, and called for her deportation, etc). You guys were fooled into running a fake story that even US Weekly pulled and apologized for their blunder. Total lies - and you guys (once again) even put quotation marks around things I have never uttered. Then, Time needs to run an apology to Christina along with the retraction. (Add Hannity in your apology, too...those good folks don't deserve to be in a caustic, untrue story about me.) Thanks much - keep up the great work, Time Magazine.

I think Huston and Palin make a good couple - they both are illiterate hate-mongers who try to make everything into a war against themselves and the "mainstream media."

As a side note, I noticed Palin made a tweet on February 11th asking if the media would question whether or not the Obama administration would exert the similar "constructive" pressures for Iran to reform their government.

This is interesting when Palin made numerous prior comments claiming the administration did not do enough in the Egypt situation and that the administration was handling the protests poorly.  Now that Mubarak is out of office and the Egyptian military is reforming the government, per the protestors' demands, has Palin decided to change her story?
Posted by Kevin at 11:37 AM