Amanda Terkel wrote the following for The Huffington Post:


It's day four of exile for Wisconsin's Democratic state senators, who crossed state lines in order to stall the expedited passage of Gov. Scott Walker's (R) budget proposal. Although many of the governor's supporters have called on them to come back to Madison, Democrats are ready to stick it out in Rockford, Ill. until Walker agrees to negotiate.

"We'll be here until Gov. Walker decides that he wants to talk," said state Sen. Tim Carpenter (D) in an interview with The Huffington Post on Saturday. He added that so far, the governor refuses to meet with them or even return the phone calls from members of the Democratic caucus.

"He's just hard-lined -- will not talk, will not communicate, will not return phone calls," said Carpenter. "In a democracy, I thought we were supposed to talk. But the thing is, he's been a dictator, and just basically said this is the only thing. No amendments, and it's going to be that way."

"Clearly, we offered a viable compromise at the end of last week," said state Sen. Robet Wirch (D), who is in northern Illinois, but not in Rockford with other members. "We wanted the clergy to come in and mediate this thing. But the governor just has his feet in cement."

Walker's office did not respond to The Huffington Post's request for comment.

Remember during the health care debate, when every conservative claimed Democrats were ramming the legislation down the throats of Americans?

While Democrats watered down their bill in an attempt to get a couple conservative votes, things are a bit different in Wisconsin, and now that conservatives are in charge it seems they don't care what the minority party thinks - they just want there way.

I believe the situation in Wisconsin is indicative of what America is seeing all across the nation, whether it is Republican congressmen working to redefine rape, or the Florida governor turning down funds that would cover the costs of a high-speed rail line, the fact of the matter is that Republicans are making some of the same mistakes Democrats made after their victories in 2008.

David Brady, Morris P. Fiorina, and Douglas Rivers had written an excellent article for conservative publication Policy Review regarding on the state of affairs, discussing how exactly Democrats lost in the 2010 midterm elections (also not delving into the contributing factors, such as conservative media misinformation, for such swings in public opinion), coming to the conclusion that voters did not vote for Republicans in 2010 - they simply did not vote for Democrats.


What does the Republican “shellacking” of Democrats in 2010 portend for 2012? If history is any guide, the answer is not good news for Republicans, at least for the post-World War II period. In 1946, the Republicans gained 55 seats in the house and 12 in the Senate to take control of Congress for the first time in 16 years. Democratic prospects for 1948 looked so poor that Senator Fulbright, a Democrat, proposed that President Truman appoint a Republican secretary of state (next in line for the presidency after Truman’s elevation), resign, and cede the presidency to the Republicans. Contrary to expectations, Truman campaigned against the “do-nothing” Republican Congress and won reelection. A generation later, after the 1994 elections gave Republicans control of Congress for the first time in 40 years, some in the media wondered whether a weakened President Clinton was still relevant. But after two government shutdowns Clinton was reelected overwhelmingly in 1996. The key to understanding how these two new Republican Congresses managed to reelect sitting Democratic presidents lies in the policy choices they made. In the flush of a big victory they overreached.

In the 112th Congress, a key issue will be government spending. The one common principle across all the Tea Party movements in states and localities was that the country cannot afford our current deficits, let alone those looming in the not too distant future. Addressing the deficit problem involves raising taxes, cutting spending, or some combination of the two. Thus far, Republicans have been insistent on cutting spending while keeping the Bush tax cuts in place and enacting no new taxes. In principle, very strong economic growth could increase incomes sufficiently to increase revenue without increasing the tax rate; however, few expect the economy to do this in the near future. Given that the next election will occur before economic growth can solve the problem, the key issue for Republicans is reducing government spending.

While the electorate in 2010 yelled a loud “no” to the policies of the president and Democratic Congress, the negative verdict was by no means carte blanche for Republicans to carry out their own wish list. Given the centrality of spending issues, we conducted a YouGov/Polimetrix poll on sixteen federal programs, asking whether spending on each should be increased, decreased, or kept the same. Table 3 presents the results of this poll. 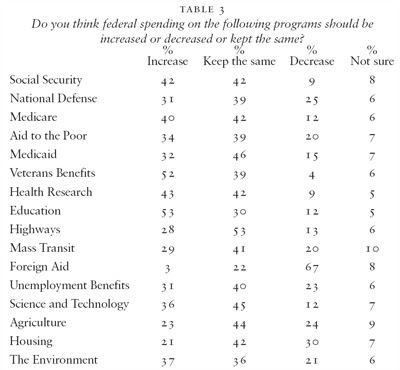 In fifteen out of sixteen programs, a majority of the public would like spending to be increased or kept the same. The only program that a majority of Americans would cut is foreign aid. Most importantly, in the large entitlement programs, Social Security, Medicare, and Medicaid, only small minorities favor the cuts that must come if the budget deficit is to be brought under control. Defense enjoys a similarly privileged status, with 70 percent favoring either current spending or an increase. Even in agriculture and housing, over 60 percent of Americans favor keeping expenditures where they are or increasing them.

Data like these should inform the agenda of the new Republican House majority. In 2010 the country voted no on Democrats, not yes on Republicans, and certainly not yes to across-the-board spending cuts. The new majority faces the hard reality that, in general, voters want spending reduced, but when it comes to specific programs, there are none that stand out, save foreign aid, which, if eliminated entirely, would not dent the deficit of the United States.

Basically, conservative politicians like Scott Walker or Rick Scott want to avoid the Democratic process and ram their policies through.  Luckily Wisconsin Democrats decided to stand up to Republicans.  The events in Wisconsin reminded me of a similar incident - in 2003, Texan Democrats fled to Oklahoma to prevent Republicans from reaching quorum.  Republicans even sent our state troopers and the Texas Rangers.  I recall in 2003 that I was a bit more critical of the Democrats' actions, thinking they were denying their constituents representation, but now I understand a little bit more, and see that these legislators are providing a voice for their constituents by not showing up, otherwise they would be forced to deal with legislation that their voters do not want.

I believe the compromises Democrats offered Walker were decent, but Walker has no interest in listening to all Wisconsinites - he only wants to listen to his voting base.
Posted by Kevin at 3:07 AM