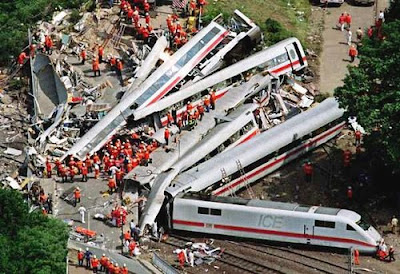 In an attempt to drive another nail in America's high-speed rail infrastructure improvements, Big Government author Christopher C. Horner points to a Washington Post article by Charles Lane as proof that high-speed rail is nothing but a government boondoggle.  The Lane article discusses the problems arising in China's railways, but Horner decided to selectively quote the article to give the appearance that all high-speed rail projects are destined for failure.


“is ruined, and his high-speed rail project is in trouble. … his ministry has run up $271 billion in debt — roughly five times the level that bankrupted General Motors. But ticket sales can’t cover debt service that will total $27.7 billion in 2011 alone. Safety concerns also are cropping up.

Faced with a financial and public relations disaster, China put the brakes on Liu’s program. On April 13, the government cut bullet-train speeds 30 mph to improve safety, energy efficiency and affordability. The Railway Ministry’s tangled finances are being audited. Construction plans, too, are being reviewed.

Liu’s legacy, in short, is a system that could drain China’s economic resources for years. So much for the grand project that Thomas Friedman of the New York Times likened to a “moon shot” and that President Obama held up as a model for the United States.”

Horner conveniently leaves out the portion of the article that discusses why the "high-speed rail project is in trouble."  The following sentence in bold was left out of Horner's piece:


Today, Liu Zhijun is ruined, and his high-speed rail project is in trouble. On Feb. 25, he was fired for “severe violations of discipline” — code for embezzling tens of millions of dollars. Seems his ministry has run up $271 billion in debt — roughly five times the level that bankrupted General Motors. But ticket sales can’t cover debt service that will total $27.7 billion in 2011 alone. Safety concerns also are cropping up.

Horner also ignored this little gem later on in the article, probably because it didn't fit his narrative:


Rather than demonstrating the advantages of centrally planned long-term investment, as its foreign admirers sometimes suggested, China’s bullet-train experience shows what can go wrong when an unelected elite, influenced by corrupt opportunists, gives orders that all must follow — without the robust public discussion we would have in the states...

In 2004, the State Council signed off on Liu’s plan to build the world’s largest high-speed-rail network by 2020. The first leg, a 72-mile stretch between Beijing and Tianjin, would open in time for the 2008 Olympics.

Word went forth that state-owned banks and local governments were to give Liu all the money, land and labor he required. When Chinese journalists found that Liu’s ministry was using cheap, low-quality concrete, creating a safety hazard, the Communist Party’s propaganda department quashed the reports, according to a January piece in the South China Morning Post.

Maybe Horner should have picked a better article to cherry-pick information for his narrative
Posted by Kevin at 9:14 PM