Turn on any right-wing media source and you will see countless criticisms of the president's handling of the assault on Osama bin Laden's compound in Pakistan.  You will see claims ranging from he did too much (he violated the law in authorizing such an attack) to he did too little (he was playing golf when the military decided to act without him), but one thing is certain - as news trickles out regarding the events that transpired last week, we are catching a glimpse of what kind of leader President Obama is behind closed doors.

Here is an excerpt from a New York Times article by Eric Schmitt, Thom Shanker and David E. Sanger that demonstrates the kind of deliberation and calculation Obama took in authorizing the strike:


President Obama insisted that the assault force hunting down Osama bin Laden last week be large enough to fight its way out of Pakistan if confronted by hostile local police officers and troops, senior administration and military officials said Monday.

In revealing additional details about planning for the mission, senior officials also said that two teams of specialists were on standby: One to bury Bin Laden if he was killed, and a second composed of lawyers, interrogators and translators in case he was captured alive. That team was set to meet aboard a Navy ship, most likely the aircraft carrier Carl Vinson in the North Arabian Sea.

Mr. Obama’s decision to increase the size of the force sent into Pakistan shows that he was willing to risk a military confrontation with a close ally in order to capture or kill the leader of Al Qaeda...

The planning also illustrates how little the administration trusted the Pakistanis as they set up their operation. They also rejected a proposal to bring the Pakistanis in on the mission.

Under the original plan, two assault helicopters were going to stay on the Afghanistan side of the border waiting for a call if they were needed. But the aircraft would have been about 90 minutes away from the Bin Laden compound.

About 10 days before the raid, Mr. Obama reviewed the plans and pressed his commanders as to whether they were taking along enough forces to fight their way out if the Pakistanis arrived on the scene and tried to interfere with the operation.

That resulted in the decision to send two more helicopters carrying additional troops. These followed the two lead Black Hawk helicopters that carried the actual assault team. While there was no confrontation with the Pakistanis, one of those backup helicopters was ultimately brought in to the scene of the raid when a Black Hawk was damaged while making a hard landing.

“Some people may have assumed we could talk our way out of a jam, but given our difficult relationship with Pakistan right now, the president did not want to leave anything to chance,” said one senior administration official, who like others would not be quoted by name describing details of the secret mission. “He wanted extra forces if they were necessary.”

A big difference from the reporting that claims Obama shot an unarmed man or that he was inept and senior security and defense officials ignored the president. 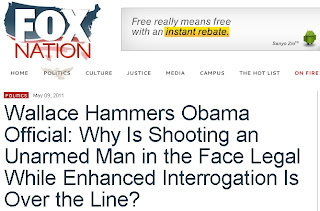