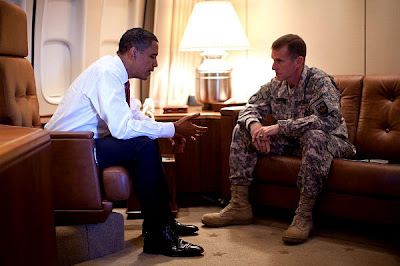 Lori Ziganto, a homeschooling mom who writes for Big Government, wrote a review of President Obama's speech, complaining that the president was giving too much details on the future troop withdrawal and that Obama's comments on "nation-building here at home" was way out of line because America has been a nation has already been "built."


Note, this is a far greater reduction than military commanders advised, but when did that ever stop him? His surge approval, over which he dithered for months, was for far less than they wanted. I’m sure he’d just remind us all how he is the one with the ‘gutsy calls’ and all. Who needs military experts or the advice of people on the ground? That’s for mere mortals. President Obama once again proved beyond a shadow of a doubt that not only is he woefully incompetent as an Executive, but he is also dangerously irresponsible as a Commander in Chief...

Secondly, how about you start practicing that preach here. That’s what we Americans want, actually. Leave us be and get out of our way. Our nation was already built and we like it. We do not want, nor need, your ‘nation-building’, which is in actuality tearing us down. I know reality is hard for you to see from your ivory tower perch, but hopefully you’ll get the hint soon enough. Come election time. He ended, in part, by saying “Let us responsibly end these wars, and reclaim the American Dream that is at the center of our story.”

It was General McChrystal, who wanted.the troop surge.  It was also McChrystal who complained about the administration in an interview published by Rolling Stone, but it seems Ziganto is only upset when the president talks about military actions publicly.

Ziganto then goes on to complain that Obama wanting to focus on America.  "Our nation was already built and we like it," she wrote, but Ziganto must live in a fantasy land.  America's infrastructure is crumbling and lacks modern mass transit, like a high-speed rail that conservatives like Ziganto fought against.  Our education system is inadequate, health care is far from affordable, and we continue to rely on foreign energy supplies - again, conservatives like Ziganto have no interest in "nation-building" at home and investing in newer technology that would help us rely less on foreign nations.

Ziganto also complained about the reintegration of the Taliban in Afghanistan.  She makes it sound as if this idea just popped into the president's head, but how exactly do you think this concept came to be?  Those very same experts and military commanders Zigato complains that the president isn't listening to came up with this strategy - General McChrystal believed the the Taliban should play an active role in the political process.

Basically, Ziganto is another one of those ignorant conservatives who believe the president and anything he does is bad, justifying her hypocrisy.  What is even sadder is that Ziganto is homeschooling her daughter creating a second generation of ignorance.
Posted by Kevin at 10:35 AM