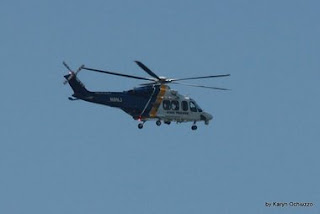 I am sure by now you have heard of New Jersey Governor Chris Christie's latest scandal involving him using state police helicopters to get to his son's baseball games and to a political fundraising dinner, but have you heard that Christie has decided to repay the state for his improper use, and not because he did something wrong, but because he wants the problem to go away.

With his use of State Police helicopters to attend two of his son’s baseball games and a dinner with political donors going viral, Gov. Chris Christie on Thursday reversed himself and wrote a check to the state for $2,151.50 to cover the cost of being taken out to the ballgames.

The state Republican Party, Christie said, will pay the remaining $1,232.29 to cover the cost of hustling him to the governor’s mansion in Princeton for dinner with a delegation of wealthy Republican donors from Iowa intent on persuading him to run for president in 2012.

He said by flying to the games he was trying to balance his role as a father — "sometime when you are a governor you do not control your schedule" — with that as the state’s chief executive.

I find Christie's arrogance to be interesting. He claims he did nothing wrong, only trying to be a good father and a chief executive, but his reasons - child baseball games and partisan fundraising dinners - hardly seems to fall in the category of state business, meaning Christie's use was solely personal.

On Wednesday, State Police Supt. Rick Fuentes claimed the helicopter rides would not cost the state any additional money because those trips were going to be taken anyway because the pilots would have had to be trained on the new equipment anyway, but if that is the case, then why did Christie repay the state? Christie claims his reimbursement will cause a surplus in the State Police's budget.

According to Gibson, it has been common practice for governors to reimburse the state for personal trips.

"In the past, the practice had been to reimburse the state for flights not related to official business," Gibson wrote. "In 2002, the Democratic Party paid the state $18,200 for 14 flights by Gov. Jim McGreevey that were deemed political or personal, including one to a wedding."

Christie also touted the importance of attending his son's baseball game because it was the playoffs, but he only stayed for a few innings before leaving for his fundraiser. Does that sound like balancing being a father with being a chief executive, or more like a man more interested in catching a free ride to get some free money from some donors?