According to a Washington Post article by Aaron Blake and Amy Gardner, the comedian was kicked off the stage "after making racial, gay jokes," but in that article, Blake and Gardner quote RLC President and CEO Charlie Davis as saying the impersonator (Reggie Brown) "was funny the first 10 or 15 minutes" but then it started getting "ridiculous."

Those "racial, gay jokes" were in the first 10 or 15 minutes. It started getting, as Davis called it "ridiculous," when Brown started targeting Republican candidates.

On Saturday, a Barack Obama impersonator by the name of Reggie Brown performed at a Republican Leadership Conference in New Orleans.  Brown's routine didn't go as well as planned, with the RLC cutting his microphone and ushering Brown off stage, but the story the media is pushing is that Brown was booted for making racially-tinged remarks.  That is not the truth - the audience received the racial jokes rather well and only started to cool on Brown when he started making jokes about the current field of GOP presidential candidates.

What were some of the racial remarks that the GOP audience enjoyed? 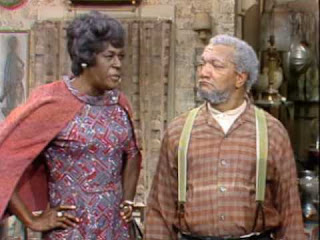 "My mother loved a black man and, no, she was not a Kardashian," the Brown said, referring to Khloe Kardashian, who is married to basketball player Lamar Odom of the Los Angeles Lakers (her sister had also dated numerous black men).

Brown also made reference to the "Birther" conspiracy joking that the president was born in Hawaii, "or as the tea partyers call it, Kenya." He also showed a picture of what the first family would look like at the end of his term - Fred Sanford and his sister-in-law Esther (the crowd loved this joke but when Brown commented that George Washington aged considerably during his terms, showing a picture of Barbara Bush as an aged Washington, the crowd booed)..

Brown also said while Michelle Obama celebrates all of Black History Month, he only celebrates half - a reference to his biracial heritage.

Watch the video of the event - you will see that all the racial jokes were accepted and cheered on by the audience.  He was, however, booed when he first mentioned Newt Gingrich's campaign, Mitt Romney's religion, and Tim Pawlenty's "Obomney care" and inability to stand up for his own words - they kicked Brown off stage just as he got to Michele Bachmann.

Here is the video so you can see for yourself that the RLC have no problem with race jokes: