A Lesson On The Laffer Curve For Big Government

Dan Mitchell decided to touch upon economic theory as a way to attack the current push for revenue increases, but his economics lesson seems to be very lopsided and I will explain why after this excerpt from Mitchell's post.


One of my frustrating missions in life is to educate policy makers on the Laffer Curve.

This means teaching folks on the left that tax policy affects incentives to earn and report taxable income. As such, I try to explain, this means it is wrong to assume a simplistic linear relationship between tax rates and tax revenue. If you double tax rates, for instance, you won’t double tax revenue.

But it also means teaching folks on the right that it is wildly wrong to claim that “all tax cuts pay for themselves” or that “tax increases always mean less revenue.” Those results occur in rare circumstances, but the real lesson of the Laffer Curve is that some types of tax policy changes will result in changes to taxable income, and those shifts in taxable income will partially offset the impact of changes in tax rates... 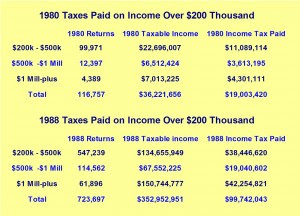 The key takeaway is that the IRS collected fives times as much income tax from the rich when the tax rate was far lower. This isn’t just an example of the Laffer Curve. It’s the Laffer Curve on steroids and it’s one of those rare examples of a tax cut paying for itself.

Folks on the right, however, should be careful about over-interpreting this data. There were lots of factors that presumably helped generate these results, including inflation, population growth, and some of Reagan’s other policies. So we don’t know whether the lower tax rates on the rich caused revenues to double, triple, or quadruple. Ask five economists and you’ll get nine answers.

But we do know that the rich paid much more when the tax rate was much lower.

Mitchell argues that tax revenue increased because tax rates decreased from 70 percent to 28 percent and that the administration, wishing to raise tax rates, will effectively reduce the amount of money the IRS would collect.  There is one problem with Mitchell's use of the Laffer Curve - while tax revenue may increase from a tax cut, cutting taxes too much would have the same effect as raising taxes too much. 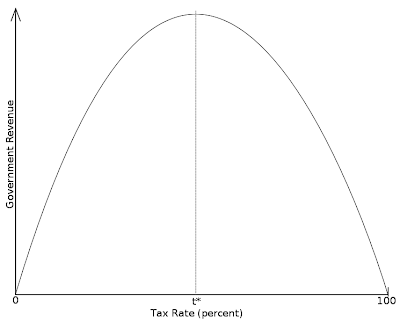 Now consider the numbers Mitchel cited as proof he is right - 70 percent and 28 percent.  This is approximately where they would appear on the graph: 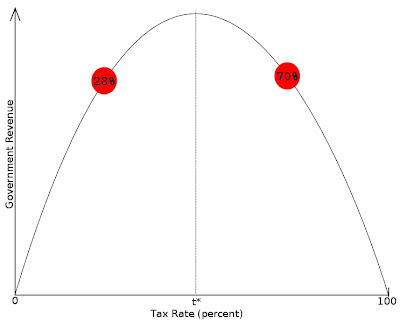 What does this mean?

According to Mitchell's economic theory of choice, tax revenue would be maximized by utilizing a tax rate increase to roughly 50 percent (or theoretically any number greater than zero percent and less than 100 percent).  Considering the periods of economic prosperity in the nineties and that tax revenues dropped after the implementation of the Bush tax cuts, one could pretty much argue that a rate lower than 28 percent would not yield higher revenues.

Based on the numbers Mitchell presents as proof lower rates would increase revenue, here is another depiction of the Laffer Curve: 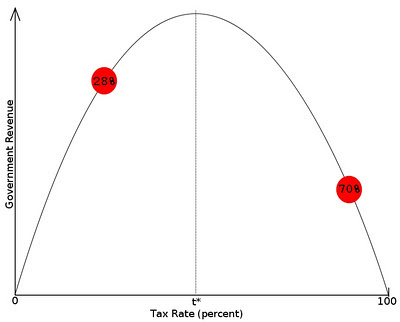 Why won't Mitchell admit that increasing taxes even a little bit won't hurt the economy?
Posted by Kevin at 6:35 PM