The Lies Of Sand Lake Hills - The Meetings 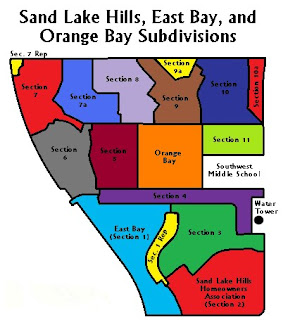 It has been sleepy here in Sand Lake Hills, Florida, for several months since a judge ruled the non-profit acting as a master association for all of Sand Lake Hills lacked any authority to do so - for over twenty years. Unfortunately the board and members of Sand Lake Hills Section 2 Homeowners Association are still a bit delusional. While they may have opened back up their secret meetings they have decided to rewrite history and try and paint the situation favorable for them.

At the last meeting, held May 18th, 2011, the corporation, for the first time in years, allowed every homeowner in every section to attend their once secret meetings. They decided to host this meeting to inform the neighborhood that they lost their lawsuit, sort of. The board president, Ted McDonald, proceeded to explain that the judges' ruling was a bit unclear and that the ruling only applied to one property. The president also stated that they did not have the authority to threaten people with lawsuits for not paying their "maintenance assessment."

How unclear was the judge's ruling?

The judge wrote that the "Section Two HOA was not authorized to enforce use restrictions in section three after December 10th, 1985."

The judge said nothing about the corporation lacking the authority to enforce the use restrictions on just one property.

Anyway, the HOA somewhat admitted defeat but continued to contradict themselves claiming they were not trying to become mandatory but then stated they were waiting for "clarification" to proceed with forcing non-members to pay their corporation.

While these lies were less obvious, McDonald had a real humdinger when he started explaining  they started holding secret meetings because trouble-makers were causing a disruption and preventing business from being conducted.  McDonald lamented the change of venue because the previous location, the Dr. Phillips Library, was free.  This is different then what the association told the homeowners right after they started holding their meetings in secret.  In the November 2008 issue of Sand Lake Hills Living, the board claimed Orange County started charging for use of the meeting room at the library.

Here is a little video detailing the lies:

Why would this corporation lie to the homeowners of Sand Lake Hills about not only their meeting location but in regards to other things, too?

For instance, during the May 18th meeting, Treasure Denise Crotty talked endlessly about the neighborhood's common properties yet during the court proceedings the association admitted there were zero common properties. (This lie will be the focus of another video)

Basically, the Sand Lake Hills Section Two Homeowners Association, Inc. held secret meetings to prevent information regarding the lawsuit from spreading to the neighborhood so they could continue soliciting homeowners for membership and forcing non-members to pay their corporation.

Update - I had just noticed something on Sand Lake Hills' website.  According to their homepage, they had announced the date, time, and location of their next meeting on November 2nd, giving 17 days notification.  This is not true.

I had visited their website on November 2nd at 4:27 PM as well as 11:01 AM November 3rd and 11:20 PM November 6th.  It was not until Tuesday, November 8th, that I noticed the website had been changed, giving non-member homeowners only 8 days notice - it is safe to assume that the association gave more advanced notice to the membership because they state in their online proxy form that there was a mailed notice.

Why would the board lie about when they posted the notice on their website unless they were trying to misinform a certain percentage of the homeowners in order to prevent those whom they disagree with from attending, namely non-member homeowners or those members who were led to believe they were required to join.

The deception continues to grow...
Posted by Kevin at 4:16 PM