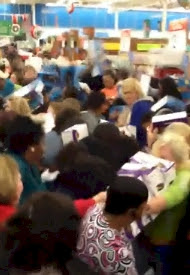 Democrats and their allies launched a drive to recall Republican Gov. Scott Walker earlier this month. They're angry over a number of Walker policies, including a law that stripped public workers of their union rights.

Recall organizers say signature gatherers planned to set up near malls, shopping centers and park-and-rides around the state Friday.

Republicans say the effort amounts to harassing shoppers. The party says businesses should call police if signature gatherers don't leave their property upon request and shoppers should report problems to the GOP's "Recall Integrity Center" website.

Never realized participating in democracy was considered harassment - especially on Black Friday.  And I guess  fighting over a $2 dollar waffle maker at Wal-Mart is more important then signing a recall petition in the parking lot.
Posted by Kevin at 2:35 AM