Rick Santorum Able To Get Insurance For Bella Because Of "Obamacare" 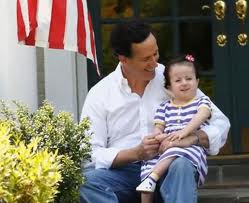 "I had insurance under my employer. And when I decided to run for president, I left my job, I lost my insurance, I had to go out and buy insurance," Santorum recently said in regards to his terminally ill daughter, Bella, who suffers from Trisomy 18, a genetic disorder resulting in an extra chromosome and can cause severe growth retardation, malformed facial features, heart defects and other abnormalities.

While it is unfortunate that Rick Santorum has a seriously sick child, his comments regarding his daughter do not seem to resonate with his political positions surrounding healthcare reform. Earlier this year Santorum made the comment that under the health care reform more disabled people would be denied care but this statement is absolutely false - because of health care reform people like Santorum's daughter are able to get treatment, and possibly more importantly, they are able to get insurance despite having a preexisting condition.

This is where Santorum's "Bella" message falls apart. He talks about having to go out an buy insurance for his seriously ill child but anyone who was out of work or who did not have insurance prior to a major condition could tell you - purchasing insurance with a preexisting condition, no matter how severe, was a tremendous hassle before the Affordable Care Act was passed.  Considering Santorum was fired from Fox News earlier this year, it is safe to say that this was the employer he talked about, meaning it was because of "Obamacare" that little Bella was able to get insurance. You see, the Affordable Care Act actually banned the practice of denying coverage to children with preexisting conditions (it will expand that protection to everyone by 2014), so had it not been for this law Santorum would have had to pay out-of-pocket for his daughter's care - a luxury many Americans cannot afford.

If you like hypocrisy, you may want to check out this other Santorum doozy - while Santorum is opposed to abortion of any kind calling any exceptions "phony" excuses, he had no problem when his own wife had an abortion at 20 weeks (four and a half months).

"When I was leading the charge on partial birth abortion, several members came forward and said, 'Why don’t we just ban all abortions?' Tom Daschle was one of them, if you remember," said Santorum. "And Susan Collins, and others. They wanted a health exception, which of course is a phony exception which would make the ban ineffective."

Santorum's wife utilized such a "phony" health exception when her life was in danger had she carried full term, but Santorum doesn't practice what he preaches. He just wants to impose his views on everybody else.
Posted by Kevin at 10:51 AM