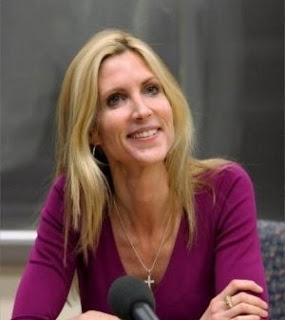 Mitt Romney supporter made a surprising admission Wednesday in support of the GOP candidate - that something is only a "mass triumph" of "free market principles" when it is undertaken by Republican.  When a Democrat does the same exact thing it becomes "socialism."

Ann Coulter wrote the following on her blog:

If only the Democrats had decided to socialize the food industry or housing, Romneycare would probably still be viewed as a massive triumph for conservative free-market principles -- as it was at the time...

Until Obamacare, mandatory private health insurance was considered the free-market alternative to the Democrats' piecemeal socialization of the entire medical industry.

Interesting.  So by that logic Coulter should be supporting Obamacare, right?
Posted by Kevin at 11:12 AM