Confirmed: Most Florida Albertsons' To Close By June 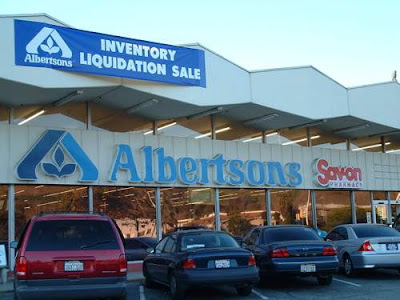 The grocer rumor mill has been in overdrive these past few hours (and has been confirmed by Albertsons Public Affairs Director Christine Wilcox) as rumblings in Florida indicate Albertsons', the once-coast-to-coast food chain, will be shuttering its doors by June of this year.  This doesn't come as a surprise to some - the remaining stores, numbering close to two dozen, have been operating on borrowed time.  Owned by Cerberus Capital Management, one of the largest private investment equity firms in the United States, Albertsons' LLC has pretty much sold off the chain's infrastructure since 2006.  It was only a matter of time since 2008, when Publix Supermarkets acquired the cream of the crop.

Only 4 stores will remain open in Florida - the ones located in Clearwater, Altamonte Springs, Oakland Park and Largo. Albertsons will even close their distribution center in Polk County. This brings into question the viability of the remaining stores being that there seems to be an absence of an efficient supply chain for the remaining locations in the state.

As I had written back on November 17, 2009, I strongly advise associates to start exploring their options and familiarizing themselves with the terms of their eventual termination.  Demand severance agreements, if any, from the human resources department and record everything.  My personal experience with the company demonstrated their lack of commitment to their associates, which is why I offer online the severance agreement for hourly associates from 2008 as a point of reference.  It can be viewed here.
Posted by Kevin at 7:06 PM