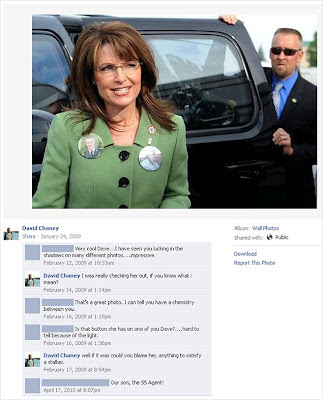 Uh oh.  Now that Mitt Romney is the presumptive nominee and all hopes for the Alaskan Clap Trap being president have been dashed, Sarah Palin has been trying to become relevant again by speaking to the press, and by press I mean Fox News.

Palin, known for her in depth analysis on politics and current events decided to weigh in on the most recent prostitution scandal to hit the airwaves, and no I don't mean Todd visiting the local Alaskan masseuse for a happy ending - Palin joined her Scientologist gal pal Greta Van Susteren to talk about the matter of secret services protecting President Obama visiting prostitutes while on official business in Colombia.  It seems that Palin had something to say about this situation because one of the agents in question actually served on her security detail four years ago.

Here is what Palin had to say:


It's a symptom of government run amok, though, Greta. And it's, like, you know, who's minding the store around here? And when it comes to this particular issue of Secret Service, again, playing with the taxpayer's dime and playing with prostitutes and checking out those whom they are guarding.

You know, the president, for one, he better be wary there of -- when Secret Service is accompanying his family on vacation. They may be checking out the first lady instead of guarding her.

And I say that not just tongue in cheek, but I say that seriously, that the president, the CEO of this operation called our federal government has got to start cracking down on these agencies! He is the head of the administrative branch and all these different departments in the administration that now people are seeing things that are so amiss within these departments.
The buck stops with the president. And he's really got to start cracking down and seeing some heads roll. You know, he's got to get rid of these people at the head of these agencies where so many things, obviously, are amiss.

Why is Palin way off base with her comments?

Because if you think about it, this one particular agent was with her four years ago.  Who was minding that store?  What did the secret service do when they were watching Palin, and if Palin was so concerned with her agents protecting her, why would she distract them by posing for pictures with them?  If she was more vigilant maybe this never would have happened.

Palin also over-concerns herself with some Facebook banter.  The agent was just making a smart ass comment.  Did she seem that concerned when her daughters took to Facebook calling people "faggots?"  If you use the same logic Palin is using for the secret service agent and apply it to her own family, then her head should have rolled.  Instead, Sarah Palin defended her daughter's reprehensible online activities.

There were also a couple other things I found interesting about the interview with Greta Van Susteren - Palin cites a non-existent constitutional article to attack the president.

"And the number one thing, Greta, that he is responsible for is -- he today violating Article 1, Section 19, Clause 7 of the United States Constitution in not having a budget. Going on three years, over a thousand days with no budget, no blueprint to run our federal government!

Article 1 of the constitution only has 10 sections - not 19 - and in those 10 sections there is no mention of the president presenting a budget, and technically, wouldn't it be congress' job to make the budget in the first place? Wouldn't they be the actual ones responsible for writing a budget?  The president could make suggestions but I think the constitution limits his role a bit.

Greta, by the way, totally agreed with Palin on the non-existent constitutional article.

Anyway, to cap off this article I leave with these two other lies by Palin:

Secondly, energy production has been up under Obama, especially renewable energy sources.


Since President Obama entered office three years ago, renewable energy production in the US has climbed 26.9%, according to the Energy Information Agency’s (EIA) latest “Monthly Energy Review.”