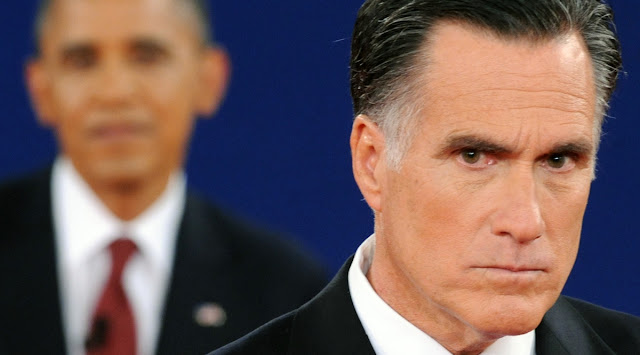 The second presidential debate got pretty heated Tuesday night.  Obama was alert and passionate offering details as to how he would proceed with a second term.  Romney skipped on specifics and went for Obama's jugular, talking over the moderator declaring his own terms for the debate and at times directing his comments towards the president in an overly aggressive manner, talking over the president when he attempted to respond.  In one particular instance, when Romney insisted the president failed to call the attack on the American consulate in Libya an act of terrorism until two weeks after the September 11th raid on the complex, the president and the moderator called Romney out on his lie.

ROMNEY: I think (it's) interesting the president just said something which -- which is that on the day after the attack he went into the Rose Garden and said that this was an act of terror.

OBAMA: That's what I said.

ROMNEY: You said in the Rose Garden the day after the attack, it was an act of terror. It was not a spontaneous demonstration, is that what you're saying? OBAMA: Please proceed governor.

ROMNEY: I want to make sure we get that for the record because it took the president 14 days before he called the attack in Benghazi an act of terror.

OBAMA: Get the transcript.

Obama did indeed call the attack on the consulate an "act of terror."  On September 12th, Obama made the following statement in regards to the attack:  "No acts of terror will ever shake the resolve of this great nation, alter that character, or eclipse the light of the values that we stand for. Today we mourn four more Americans who represent the very best of the United States of America. We will not waver in our commitment to see that justice is done for this terrible act. And make no mistake, justice will be done."

Apparently that is not good enough for Fox News.  According to their "fact check," "Crowley went on to side with Romney about the administration's confusing account."

Fox News glosses over what Crowley stated after she fact checked Romney on live television, instead going on to say Obama never really meant the Libyan attack when he uttered the phrase "acts of terror" and discussed the "four more Americans" who were killed in "this terrible act."

"But Obama also hadn't explicitly labeled the Benghazi strike as an 'act of terror' as early as he claimed, though his comments on Sept. 12 in the Rose Garden indeed included that phrase."

So because Obama did not mention the words "Libya" or "Benghazi" in a speech mourning the deaths of an American ambassador and consulate staff, Fox News comes to the conclusion that Obama must have been referring to other terrorist acts.  This conservative rebuttal seems to have traveled fast.  On an article on The Huffington Post, I engaged a commenter regarding their disbelief in the assertion by the president that he did in fact call the attacks an "act of terror."


OP:  Read the transcript, Obama did not call the attack on the embassy an attack.
He blamed it on a nonexistant riot caused by the YouTube video.
His lackies repeated this deception for 2 weeks.

TMR:  "No acts of terror will ever shake the resolve of this great nation, alter that character, or eclipse the light of the values that we stand for. Today we mourn four more Americans who represent the very best of the United States of America. We will not waver in our commitment to see that justice is done for this terrible act. And make no mistake, justice will be done."

One day is not two weeks.

What did Fox News edit out of their report?

OBAMA: Can you say that a little louder, Candy?

CROWLEY: He -- he did call it an act of terror. It did as well take -- it did as well take two weeks or so for the whole idea there being a riot out there about this tape to come out. You are correct about that.

ROMNEY: This -- the administration -- the a

ROMNEY: It took them a long time to say this was a terrorist act by a terrorist group. And to suggest -- am I incorrect in that regard, on Sunday, the -- your secretary --

While Crowley admitted that there was some time for the intelligence on the entire situation to come to light, she also clearly indicated that Romney, who was attempting to bulldoze the president with his lies, was in fact lying.  What makes this lie even more egregious is that right before Crowley's smack down, Romney admitted that the origins of the situation were uncertain.

"There were many days that passed before we knew whether this was a spontaneous demonstration, or actually whether it was a terrorist attack," said Romney, before criticizing other officials for citing demonstrations as the cause.  Apparently Romney is able to smell a terrorist act before anyone else not privileged to classified information can.  Romney then shifted his line of attack on the president's actions following this event.

ROMNEY: But I find more troubling than this, that on -- on the day following the assassination of the United States ambassador, the first time that's happened since 1979, when -- when we have four Americans killed there, when apparently we didn't know what happened, that the president, the day after that happened, flies to Las Vegas for a political fund-raiser, then the next day to Colorado for another event, other political event.

I think these -- these actions taken by a president and a leader have symbolic significance and perhaps even material significance in that you'd hope that during that time we could call in the people who were actually eyewitnesses. We've read their accounts now about what happened. It was very clear this was not a demonstration. This was an attack by terrorists.

So even though the president, like Romney, is running a presidential campaign, he is not allowed to campaign because of an overseas tragedy?  Remind me what Romney was doing the week following the September 11th attacks?

On September 13th, Mitt Romney hosted a rally in Fairfax, Virginia, and an event in Ronkonkoma, New York.

On September 14th, Mitt Romney attended a fundraiser in New York City and then hosted a rally in Painesville, Ohio.

And on September 17th, Mitt Romney spoke in "brown face" to the U.S. Hispanic Chamber of Commerce.

How is it that a man seeking the highest elected office in the nation doesn't believe he should be held to the same standards he sets for the person currently in that position?  Romney felt it was appropriate for himself to gallivant around the nation fundraising and hosting rallies in the wake of a tragedy but for his opponent to do the same is just not fair, and to be clear, Romney actually held more events then the president did in that week following the terrorist attack in Benghazi, but who's counting (except for Romney).

This was basically Romney's line of attack throughout the entire debate - deflect and criticize.  When called out by the moderator, Romney just fine tuned his attack on the president by begrudgingly stating that Obama never declared a particular terrorist group responsible for the attack.  Romney probably would have not even been satisfied had Obama gave the names of the individual people responsible.  Basically, Romney was doing exactly what Obama criticized him for doing on September 11th: "You don't turn national security into a political issue."

And for that Fox News felt it was their responsibility to "fact check" Candy Crowley and give their boy a pass.

Update! - As can be expected, conservatives were quick to jump on a post-debate interview with moderator Candy Crowley, in which she explains her fact check to CNN's Anderson Cooper.  Conservatives seem to latch onto her agreement with Romney in regards to the mixed messages coming from the administration post-September 11th.

"So I knew that the president had had said you know 'these acts of terror will not stand' or whatever the whole quote was," said Crowley.  "And I think actually - because I did turn around right after that and say 'but you are totally correct that they spent two weeks telling us this was about a tape and that there was a you know this riot outside the Benghazi consulate which there wasn't."

So because after she fact checked Romney she agreed with something he said, she nullified her fact check altogether and now the conservative blogosphere has something to cling to until the next debate - more media bias against their candidate.  Even Reince Priebus seized on this non-moment to call Obama the liar!

It seems that Republicans are aware that Romney lost the debate and will probably lose his momentum he gained from the first presidential debate - the momentum that had stalled after Biden defeated Ryan in last weeks debate.  It only makes sense for them to cry foul - the only way they could lose, in their eyes, is if someone cheated.  Check the chat rooms and message boards - the moderator was in the bag for Obama and the audience was cherry-picked by the Democrats, hence the applause when Romney was called out on his bullshit, or so they say.

Update #2! - It seems the right is working overtime to save Romney from his debate debacle.  They are trying really hard to discredit Crowley's "fact check," now moving on to the applauding audience and the girl who asked the question.  It appears the girl who asked the question has a similar name with a woman associated with the liberal organization Code Pink.  Katherine Fenton, spelled with a "K," was a young girl appearing to be in her early twenties asked the question at the debate.  Catherine Fenton, with a "C," is in her late thirties and is obviously not the young girl we saw on television today but that wont stop those adamant to prove Obama was a liar and Romney was a saint last night.  On Reddit, a commenter posted the following link as proof the girl was a Code Pink plant placed their by Gallup despite the fact that the link they posted included an update stating that it appeared the girl was different then the one from the conspiracy theories.

So it seems despite even more facts the right is eager to ignore reality once again.
Posted by Kevin at 12:56 AM