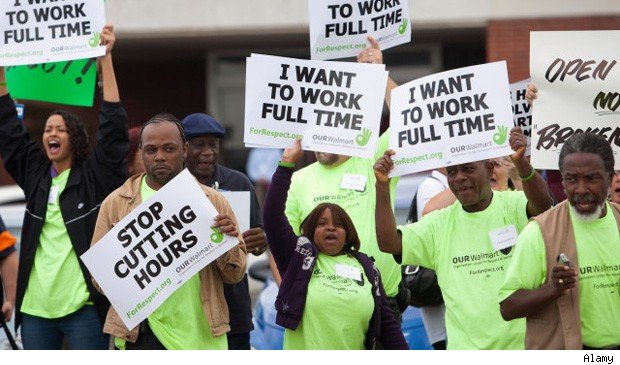 Facing numerous labor strikes, especially on major shopping holidays like Black Friday, Walmart released an internal memo on October 8th - and obtained by The Huffington Post - issuing instructions to salaried employees on how to respond to such a strike.


The memo makes clear that Walmart, the world's largest private employer, views the labor protests as a serious attack, a message that runs contrary to the company's public comments that the strikes are mere "publicity stunts," as Walmart's vice president of communications David Tovar told The Huffington Post Tuesday.

"As you know,” the memo opens, “activists or union organizers have been trying for years to stop our Company’s growth and to damage our relationship with our customers and members. One of the activists’ or union organizers’ tactics is to try to disrupt the business by urging our associates to participate in a walkout or other form of work stoppage.”

The majority of the memo is aimed at instructing managers not to violate workers' legal right to engage in concerted activity, or non-union labor organizing. Managers are directed not to “discipline” employees who engage in walkouts, sit-ins or sick-outs.

Legal experts said the confidential memo shows an unprecedented level of caution from a company that has taken harsh stances towards employee attempts to organize in the past.

“Walmart probably has in mind that the Obama NLRB [National Labor Relations Board] often sides with unions over management,” said Lance Compa, a labor law professor at Cornell University’s School of Industrial Relations in Ithaca, N.Y. “So they’re being extremely cautious.”

What makes this memo interesting is that Walmart is that despite the Walton heirs lining up behind Mitt Romney, such as Sam Walton children Jim and Alice, both giving hundreds of thousands to Romney-backed super PACs and the maximum allowable direct contribution to the Romney campaign.  If the Waltons were so confident that Mitt Romney would win the election, why would they be bracing themselves for a run-in with the Obama NLRB?

Obama got into hot water with Republicans earlier this year over blocked NLRB appointments.  During a controversial recess in January, Obama made three appointments - two Democrats and one Republican - to the board allowing the board to reach quorum and resume functioning.  This was the first time the NLRB was able to perform its duty since 2010.  If these strikes were to occur and Walmart would face action from the NLRB, it would most likely be in 2013, and by then the new president would be sworn in.  If Mitt Romney were to win, as preferred by the Walton family and Walmart, Romney would certainly allow Obama's recess appointments to expire returning the NLRB to gridlock, meanwhile pushing his own, most likely pro-management candidates for the open positions.

Walmart is hedging its bets.  Right now Obama is still ahead by a decent margin, especially in swing states, which Romney needs to reach 270 electoral votes.  Right now Romney is nowhere achieving victory and the billionaire heirs of Walmart know this so despite their thousands in contributions to help elect Romney, they are preparing for four more years of an Obama administration.  That is why this memo is interesting.
Posted by Kevin at 8:28 AM