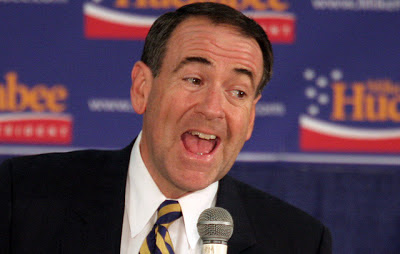 Since the horrific massacre of school children in Sandy Hook, Connecticut, a discussion on a variety of topics from media coverage to gun control has gripped this nation but some public figures have seemed to use this tragedy to advance their religious and political agendas.  Conservatives, who are the self-proclaimed defender of the Second Amendment, have used this shooting to preemptively attacks any calls for gun control with some politicians either brushing off the tragedy altogether to even calling for more guns (and even more guns in the classroom).  While there can be some arguments made for and against gun control, the attacks from conservatives have seemed to overstep a boundary.

Take former governor, minister, and current Fox News personality Mike Huckabee.  After the shooting, Huckabee blamed the absence of God in schools for the reason why the shooting occurred.

"We ask why there's violence in our schools, but we've systematically removed God from our schools," Huckabee said. "Should we be so surprised that schools become a place of carnage, because we've made it a place where we don't want to talk about eternity, life, what responsibility means, accountability. That we're not just going to have to be accountable to the police if they catch, us, but one day we stand before a holy God and judgment. If we don't believe that, then we don't fear that."

Huckabee's comments seem to ignore the fact that crime occurs in places where God has been systemically present, such as recent shootings at churches in Florida, Georgia, and Pennsylvania.  And don't forget the countless church sex abuse scandals, and if you would like to get personal, how about Reverend Huckabee's own son perpetrating acts of cruelty while a camp counselor in the nineties?  How would Huckabee explain that away?

Also, if you think about it, Baptist minister Huckabee seems to have the same stance as the crazy Westboro Baptist Church, who plan to picket the victims of the Sandy Hook shooting, claiming the shooting occurred because of the failure to recognize God and follow his plans.
Posted by Kevin at 11:56 AM