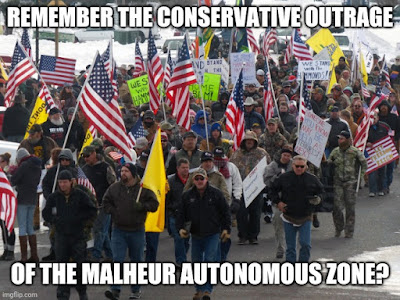 A couple years ago the infamous and traitorous Bundys led an armed occupation of a federal park in Oregon. They were inspired to occupy the property managed by the Bureau of Land Management (not to be confused with a different BLM), United States Fish and Wildlife Service, and the United States Forest Service over the conviction of Dwight and Steven Hammond for federal land arson, who were recently pardoned by President Trump for some unknown reason.

Conservative media promoted the group of anti-government militias as fighting an injustice and and defended them as protectors of the constitution and federal overreach.

What is interesting is in recent news, protesters in Seattle recently occupied a couple blocks, naming it the Capitol Hill Autonomous Zone, or CHAZ. Conservative media, as can be expected, jumped on the story painting the Black Lives Matter protesters and others as a criminal anarchist movement.

Fox News even went to the extent of poorly editing two images together to give the appearance of a violent occupation much like the Bundy gang. 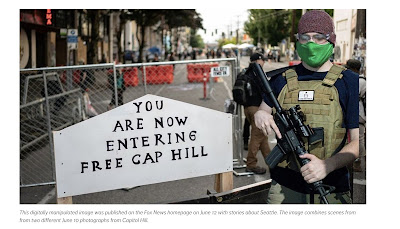 Why not the same outrage?
Posted by Kevin at 9:06 AM