Trump, Biden, and the Protesters

With protests erupting all across the nation you can see two different presidential candidates (one of them currently serving as president) behave differently towards the situations that have spread to many major cities.

Donald Trump called the protesters "thugs" and referenced a saying from a racist Miami sheriff about shooting.  He had rebuffed calls from his aides to deliver a national address and was briefly brought to a secure bunker when protests formed at the Whitehouse. And while he had spoken with the family, the victim's brother had said Trump wouldn't listen and kept talking. And when Trump visited NASA for a monumental rocket launch, Trump complained about the protesters some more. 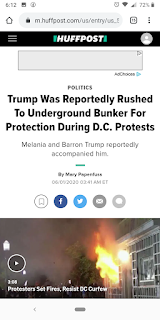 He had also tweeted this yesterday: 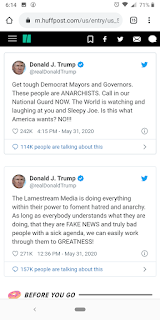 So what did Joe Biden do? 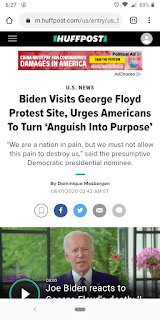 He spoke with the family, made a national address calling for peaceful protests and action, and then left his home to speak directly with the protesters in Wilmington, Delaware.

Just a reminder - it took one day after Trump was fact checked on Twitter for him to issue an executive order attacking social media companies but has yet to address this situation apart from calling for even more violence.

Remember when Trump and his allies would use every opportunity they had to talk about how great he was for black people?
Posted by Kevin at 6:29 AM