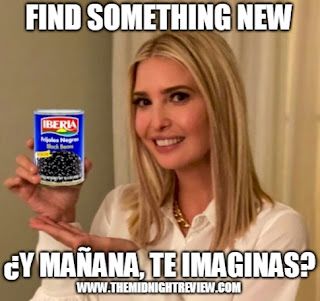 Just when you thought things couldn't sink much lower, the First Family has done it again.  While the Trumps have been skimming off the top enriching themselves with government jobs and taxpayer-funded vacations, during record unemployment tone-deaf Ivanka released a campaign that was supposed to be inspiring titled "Find Something New."

In the ad Ivanka encourages the unemployed to simply change careers and reinvent themselves during these trying times.

Remember when Trump and his industry-aligned supporters attacked Clinton for proposing the retraining of coal miners before we even had an economic downturn?

“We do not want federal money to fund training for new jobs that pay half of our current salaries,” John Stilley, the president of Amerikohl Mining, said at the time.

Well now that Trump had crashed the economy with his plan to just sit on his hands and wait for an upswing, Trump wants the unemployed masses to just do something else because as we all know, it is never Trump's fault.

Well Ivanka also provided a double whammy of deafness this week after the president of Goya Foods CEO praised the president, calling Trump a "builder," praying for continued prosperity and growth.  Ivanka decided to use her offical capacity as a government employee to pitch the product, posting an image of her holding a Goya can while using their slogan in both Spanish and English.

There is no doubt that Goya has been sitting high on the hog these last few months.  Since the start of the pandemic and the economic shut downs, retail food sales have skyrocketed, so when CEO Robert Unanue says all is good, he is probably referring to Goya's coffers... which are privately owned by the Unanue family.

And as we learned from when Kellyann Conway violated ethics rules to promote Ivanka's businesses and faced no disciplinary actions, Ivanka is free to reward those who lay praise on her father.

So here is a better fit for her Find Something New Campaign and Goya...