It is no surprise that certain articles on Fox News allow various levels of interactivity. Some permit commenting while others do not. A recent article detailing the latest Supreme Court Justice selection of President Joe Biden, Ketanji Brown Jackson, resulted in the usual attacks from the right but what was most surprising was the openness in which commenters peddled their racist insults. 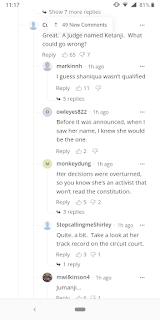 Commenters felt comfortable commenting on ethnic-sounding names or that she only represents a small minority of the population but will rule on the entire nation.

They were not outraged over Reagan promising to nominate a female so...