There was a recent headline in Florida (and the nation) when the Republican party of Florida and the governor retaliated against the state's largest employer for commenting against a recent bill dubbed by opponents as the "Don't Say Gay" bill. The Republican attack on the company, Disney, resulted in rewriting complex law in just 72 hours with no debate in which they essentially eliminated special districts such as the one that Disney kind of operates, Reedy Creek.
By eliminating the district with no plan DeSantis and Republicans have essentially saddled taxpayer's in Orange and Osceola county with billions in debt and millions more in more tax liabilities and obligations with zero increased revenue. All this in the name of conservative cancel culture and their insistence that all of their political opponents are sexual predators and deviants grooming children.
But there is probably another reason why Republicans don't care and a simple look at the electoral map would probably paint a better picture. 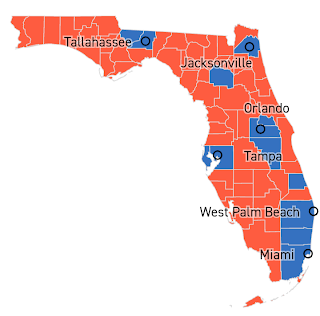 If you notice those blue sections in the middle (near Orlando), those are the affected counties from this deal. Politically speaking, if Republicans screw these voters and taxpayers they will suffer no political blowback.
And speaking of temper tantrums, Governor DeSantis has also inserted the state of Florida into the hostile takeover of Twitter by worlds richest man Elon Musk, looking to sue Twitter for breaching their fiduciary duties simply because Florida state pensions held Twitter shares. This only begs the question - does the state pensions hold Disney shares?
Posted by Kevin at 5:14 PM