Fox News had this plastered on their front page Thursday morning: 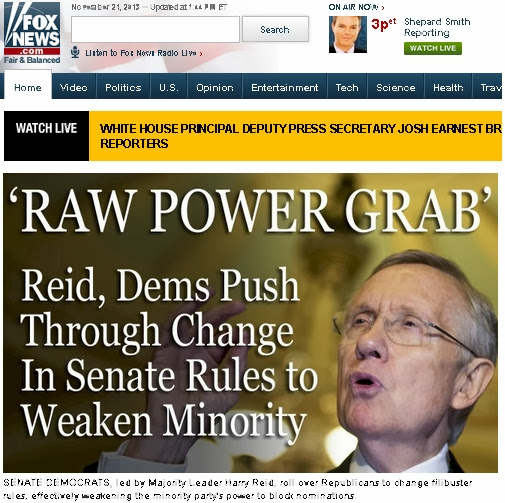 Why is this interesting?  Because Fox News cites the quote from Republicans that this is a "raw power grab" - a variation on the "court packing" theme the GOP were pushing recently with the blocking of yet another qualified judicial nominee - and insist that the Democrats have weakened the ability to "block" nominations - an admission that Republicans are not seeking healthy debate.  The article also incites fear in the right-wing base by insisting this makes it easier to make lifetime appointments while ignoring the fact that Republicans argued in the past against the blocking of judicial nominees.

Throughout the entire history of the United State of America, over half of the filibusters have been incurred by Republicans during President Obama's administration proving the widespread abuse of the procedural maneuver by congressional Republicans.  In the most recent nomination fights in which the GOP blocked qualified nominees, they held up the process by citing either unrelated reasons or imaginary controversies (see "court packing").  Democrats had then negotiated with Senate Republicans to get a vote only for GOP to eventually renege on their promises.

While many warn the Democrats that the pendulum swings both ways, a reasonable prediction would be that Republicans will further their push to repeal the direct election of senators so that gerrymandered state houses can appoint their party members to power.
Posted by Kevin at 3:30 PM 2 comments: