Did Trump and Melania have Covid-19 at the Debates?

News had broke that the President Trump and the First Lady had tested positive for Coronavirus.

During the debate, it was heavily reported that the first family abstained from the mandatory mask mandate condition established by both campaigns for the debate... except for Melania.

While the First Family took masked selfies prior to the debate... 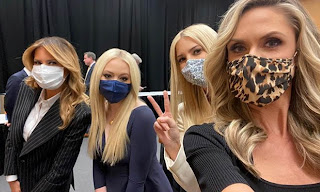 Melania was oddly seated in the middle during the debate with a mask on. 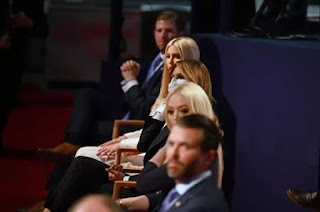 Did the first family know something more?

We had also learned recently that Hope Hicks had tested positive prior to the disclosure that the Trump's tested positive - that Hicks was symptomatic and had previously been around the president for a few days. Is this timeline correct? Was Hick's a cover for the president?

While these questions are conspiratorial, these behaviors are... suspicious, especially with revelations that since the Trump family arrived late to the debates they did not have their temperature checks, instead there was trust that each campaign had taken the necessary precautions.

Think about that - the Trump campaign was held to the honor system...

And as we have also just learned from the doctors treating Trump, he was actually diagnosed on Wednesday - not Friday. As a reminder, the debate was Tuesday. This would not only demonstrate that the president continued with activities while knowing he was positive with Coronavirus, the lack of delay in public disclosure may point to the president and his team either not being totally forthcoming in regards to when the president was officially diagnosed or that the president and his wife were feeling the symptoms on Tuesday and knowingly participated in the debate while potentially sick.

News has also revealed that one of the people responsible for debate preparations with the president, Chris Christie, had also tested positive.