Ever since Joe Biden had been elected president by huge margins and by flipping a couple "red" states Republicans have been hard at work to find a line of attack.

Last month they think they found their opening - Afghanistan.

Despite attacking President Biden just weeks and months before the final withdrawal from the war torn country on the brink of collapse for delaying the withdrawal, as in not leaving quick enough, Republicans took the chaotic imagery of planes being swarmed by desperate Afghans as a optics gift from God. They had their new narrative - Biden bungled the end of the war.

They of course heaped tons of praise on Biden's predecessor, the disgraced Donald Trump, ignoring that the former president negotiated with the Afghan rebels (initially planning the deal around the anniversary of September 11th) where he legitimized our opponents, paved the way for a power sharing agreement with the Afghan government (our allies), and released 5000 prisoners back into the Taliban custody, many who returned back to the battlefield.

Instead they claimed the Taliban were frightened under Trump, they attacked former president Barack Obama who engaged in a prisoner exchange with a few Taliban prisoners for one of our own American soldiers, blamed Biden for leaving Americans behind, complained about abandoning our Afghan allies in a bureaucratic immigration mess (that they designed), and that we just handed over billions of dollars of weapons to our enemies.

They failed to mention many other things, such as how the Afghan government collapsed overnight or the logistical nightmare of withdrawal when lacking any troop presence in a country increasingly surrounded by opposition forces.

Sure there could be some criticisms to be made and there should be some healthy analysis of the withdrawal process but it appears Republicans have taken armchair quarterbacking to a new level with their levels of dishonesty.

Take this post by Donald Trump touting a poll that shows a "plurality" of people blame Biden, not Trump for the problems overseas. 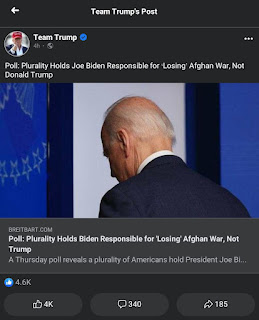 Unlike many of the followers who chimed in attacking this administration's incompetence I followed the link to a poorly phrased Breitbart article. 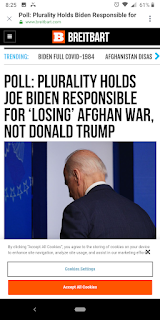 Just check out how they conflate a whole bunch of information so it sounds bad for Biden:

"A plurality, or 43 percent, of all voters blame Biden for the situation from a domestic standpoint. A majority of Republicans, 64 percent, agree with that, as do 40 percent of independents and 28 percent of Democrats.

So what does the actual polling information say?

Here is what the actual source says: 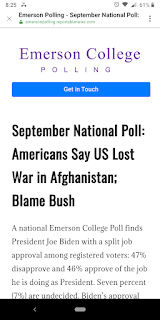 I thought Biden was to blame!

Should we delve more into what the primary source says about this?

You see this is why Breitbart bum rushed the reader with a whole bunch of numbers. 43 percent say Biden is bad? They don't even include Trump in that comparison until the end of the second paragraph and the figures are confusing. They make it sound like it is all part of the same question and so you mentally compare Biden's 43 percent to Trump's 25 percent! And how is it that second run of numbers don't even mention Biden. 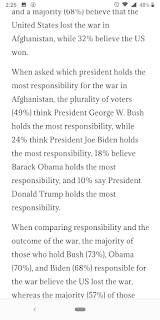 "A plurality of voters think President George W. Bush holds the most responsibility" for Afghanistan...

But Trump said a plural of voters blamed Biden for the happenings overseas.

Obviously they are on to some messaging wins here, as less Americans do blame Trump less so obviously they will run with anything to try and drive those numbers more in their favor.

This is nothing new with propagandists like Breitbart, who only a couple of weeks ago had a similar "plurality" post, in which they cited a survey that blamed Biden. 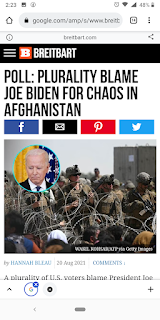 That survey of course stated that while Biden was responsible, a majority of Americans agreed with the decision.

So again, we are a progression of this narrative that Biden is somehow worse then Trump and these lies only feed into this. Trump and company lie about this only helps drive the wedge, which is indicated by the gap in opinions based on political affiliation.

So basically, Republicans have taken to the saying that if you repeat a lie enough times people will start to believe it as fact.

Central Florida representative Daniel Webster recently posted on Facebook some startling statistics but provided zero context for them leaving it up to his supporters to figure out what he was implying.

If you couldn't figure it out, Webster was trying to imply that these recent price increases are some result of the Biden administration's policies.

Seems like a simple connection  to make but it is incredibly wrong. Correlation does not mean causation but Webster's conservative fans did not disappoint. There were a string of posts blaming Biden, blessing former twice-impeached president Trump, and even some that seemed to support the Big Lie and hope for a reinstatement of the former administration.

What these posts (and Webster) ignore are the simple facts of capitalism.

You see, last year during the mismanagement of the pandemic, as the tourism industry tanked car rental companies resorted to selling their fleets to stay afloat. There had also been impacts on car production due to decreased demand from a slowing economy as well as a semiconductor shortage.

Fast forward a year and businesses are starting to open back up and people are beginning to travel again. But what about those car rental companies that sold all their cars? They need to get cars from somewhere so they have resorted to purchasing cars from the used market.

So what does this mean?

If there is a new car shortage and you have a bunch of companies buying up used cars, that would apply upward pressure to the price of new cars. That would explain the 45% increase Webster referenced. And the 88% increase in rental prices? How else are these companies going to afford their acquisitions to stay in business?

And as for the gas prices?

For one, Webster provides zero reference as to what this increase is from. Last week? Last month? Last year?

Again, all fingers can point to the pandemic. Remember when oil prices crashed last year as the world wide economy shut down? You can imagine the impact that had on the price of gasoline. Now that economies are opening up and people are beginning to travel it is only natural prices would increase. And let us not forget that this is also the summer month where people traditionally vacation.

But Webster would rather fuel partisan hatred for the benefit of his own party and himself. Or perhaps Webster really does not understand simple economics.

As the Matt Gaetz scandal starts to grow, initially starting as a federal sex trafficking case started under the Trump administration's Attorney General William Barr, the story seems to get even more involved. Gaetz initially defended his actions by claiming to be a generous friend and implicating Tucker Carlson on Carlson's own show by stating they went to dinner together but now more information is coming out, where Gaetz has been accused of palling around with a convicted sex trafficker paying for prostitutes with a variety of payment apps and sharing nude photos of his sexual encounters with members of Congress.

Now it makes you ask even more questions.

Did the dinner with Tucker Carlson involve a prostitute? An underage prostitute? Did Carlson know?

Did he share photos of underage girls in Congress?

How involved was he with other sex traffickers? 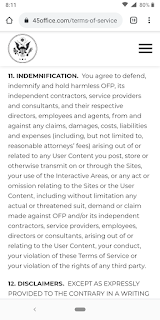