Republicans have long touted their role as the advocate for a small central government with its powers checked by the fifty states but recently the Trump administration (with the blessing of the GOP) have decided to take a step in the opposite direction and create a huge federal database of information on voters.  While this may sound somewhat innocuous at first glance, when you read what information the Trump administration is seeking to acquire from all of the states you might become a bit more alarmed.


After notoriously (and falsely) insisting in January that as many as 5 million fraudulent ballots were cast in the 2016 election, Trump created the Presidential Advisory Commission on Election Integrity last month to study vulnerabilities in the election system and provide recommendations for fixing them. The commission is led by Vice President Mike Pence and vice-chaired by Kansas Secretary of State Kris Kobach, who has a national reputation for pushing the myth of widespread voter fraud and erecting hurdles to registering to vote.

On Wednesday, Pence announced that the commission had sent letters to all 50 states “requesting publicly available data from state voter rolls.” That prompted immediate concern among voting rights advocates, which was heightened when one of the letters, sent to Connecticut, was published online, revealing alarming details about the extent of the information the commission wanted...

The requests, sent by Kobach, demanded a long list of items. The Connecticut letter requests, “if publicly available under the laws of your state, the full first and last names of all registrants, middle names or initials if available, addresses, dates of birth, political party (if recorded in your state), last four digits of social security number if available, voter history (elections voted in) from 2006 onward, active/inactive status, cancelled status, information regarding any felony convictions, information regarding military status, and overseas citizen information.'” Rather than keep this data under lock and key, Kobach’s letter says he will make it publicly available.

While many watchdog groups have alerted the public of the potential threat for voter suppression, which is not too far-fetched considering the numerous voting-related laws Republicans have pushed through over the last several years, many have which been struck down by courts for being unconstitutional political power grabs, there is also another aspect of this big government database - Republicans are seemingly using federal government resources to increase their technological ground game.

This announcement also comes nearly two weeks after Republican analytical contractors exposed 1.1 terabytes of data on over 200 million voters online, causing the Republican National Committee to halt any operations with the firm responsible.  While there has not been any link between this announcement and the information breach, a move like this could be a boon for the political party effectively cutting out the middle man.
Posted by Kevin at 5:47 PM No comments:

A Glimpse of the Fox News Racist Fans

While Hillary Clinton made a terrible error with her choice of words when she spoke during the 2016 presidential campaign about half of the supporters of Donald Trump belonging to a group called the "basket of deplorables," which conservatives then used to mischaracterize her positions against Republican voters, there is another issue at heart here -  the right wing echo chamber and the role it plays in stoking the fire.  Consider this - Donald Trump got the guy who used to run Breitbart.com to be a chief strategist and news just broke that prior to going public about withdrawing from the Paris Climate treaty Trump called Fox News commentator Kimberly Guilfoyle at 8 a.m. in the morning for reassurance.  Those so-called "news" organizations cater to a certain demographic and in turn must provide their fans with material they desire.  That is why Fox News always touts their viewership and popularity over substance and fact.  So let's look at a snap shot of the people Fox News caters to.

In this instance I will highlight the comments on an article discussing a Mike Pence interview where he defends the administration's Muslim immigration ban: 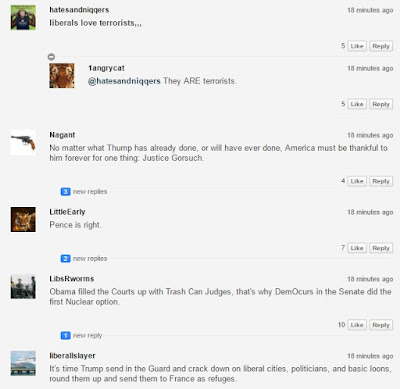 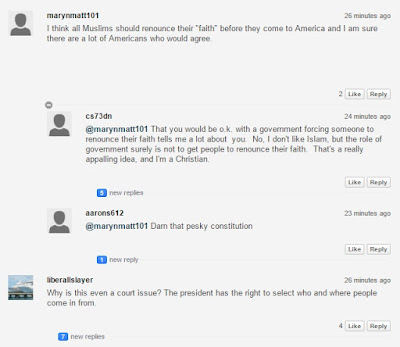 Notice anything racist and anti-Muslim?