Ever since audio of former New York City mayor and Democratic presidential candidate referencing farmers gained traction during his campaign, right wing media like Sean Hannity jumped on Bloomberg's comments and used it to highlight a new class of patriot Americans placed on a pedestal along with veterans and first responders. Hannity and company spent weeks talking to God-fearing Trump-loving farmers painting them as heroes of the soil despite the folks interviewed typically represented multimillion operations.

And when news of the Coronavirus pandemic started months ago those same media personalities dismissed the virus as a Democrat-concocted hoax.

So what have the right moved onto?

Since farmers seemed to lean conservative and Trump needs those voters in vital states for reelection, Republicans laid it on thick when they talked about them but some states are starting to recognize another set of workers that are on the front lines of this pandemic along with healthcare workers - grocers!

Minnesota and Vermont have designated grocery clerks as an emergency responder since they are out their risking their health tirelessly stocking shelves for people to purchase essential goods.

But since Hannity, Limbaugh, Dobbs, and folks of that sort have spent years vilifying these very same people as lazy people undeserving of a living wage, I am sure mention of these workers will be conveniently absent from their broadcasts.
Posted by Kevin at 1:05 PM No comments:

You would think as head of the task force and second in command of the federal government Pence would have been able to secure a source of supply for these masks, or with all that winning President Trump has been bragging about regarding manufacturing, he would have had a factory set up by now.

If only the administration took this seriously from the start instead of blaming the Obama administration and crying about news coverage.
Posted by Kevin at 6:26 AM No comments:

Here is a nifty map that details Trump properties around the globe:

And here is a map of countries not affected by the new travel ban due to the Coronavirus pandemic:

Is it a coincidence that Trump excluded the nation's that hold his resorts from his travel ban?

Remember that other coincidence when Trump placed a ban on Muslim-majority nation's that coincidentally had no business relationships with Trump? 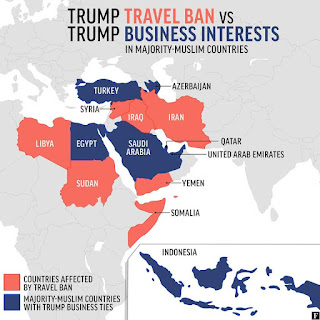 Suspicious?
Posted by Kevin at 8:04 PM No comments:

There has been recent news when President Trump retweeted a doctored video that was tweeted out by his own campaign (by Dan Scavino) that seemed to show presumptive Democratic presidential front-runner Joe Biden endorsing a reelection for Donald Trump.  Twitter was quick to utilize their new policy labeling the video "manipulated media" but Facebook had not seemed to follow suit, believing deceptively editing audio or video, such as rearranging the recording to alter the context, does not classify as "manipulated media" and thus a violation of their community standards.

But then there is something that seemed much more subversive on the social media platform - posts that seemed to promote the lie and that are linked to actual news articles that once you click the post leads to a completely different headline.

This article from Newsweek that seems to support the lie that Biden endorsed Trump appeared on Facebook: 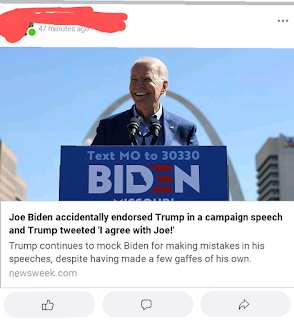 But when the link was followed, it led to this article: 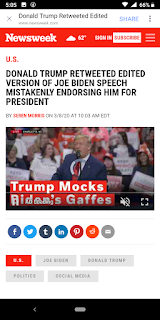 And in this article it included the full quote that was taken out of context by the Trump team.

Despite this update, it seems that somehow people have either found a workaround to to the social networks policies or are manipulating posts to give the appearance that more reputable news organizations support these doctored recordings.
Posted by Kevin at 1:36 PM No comments: