Donald Trump engaged in his first military strike of his presidency and it was a disaster.  The attack involved a botched landing, firefight with combatants, and the killing of dozens of people, including the family of dead American-born terrorist Anwar Al-Awlaki, also Americans.  Al-Awlaki's 8-year-old daughter, Nawar Al-Awlaki, was among the dead.

What makes this little-reported story more interesting, and perhaps a lot more scary, is a comment Trump made on the campaign trail back in 2015 in which he seemingly endorsed the murder of the family of terrorists as a method of combating terrorism.

Just consider this - Trump pushed through a backdoor ban on Muslims, detained legal residents and denied them constitutional rights, and then defied federal court orders, even when Democratic congressional leaders descended upon airports to confront Customs and Border Patrol agents.  He established a commission to purposefully violate one religious group while under the pretense of national security and when chaos ensued, his administration gave conflicting responses and insisted their ban was not a ban, playing a dangerous game of semantics.  And while all this is playing out only a handful of news publications trickled out stories of a failed military action (Trump's first action as president), and in those reports was the absence of Trump's campaign comments regarding the retribution against terrorists by targeting their families.  They did however include false equivalencies with similar results from military actions under the previous administration.

Trump also declared a restructuring of the National Security Council placing his chief of staff and chief strategist while removing key intelligence and military personnel during this chaotic series of events, blindsiding congressional leaders and even members of his own cabinet.

Based on past and recent comments and actions by this administration, would you put it past Trump to utilize the might of the American military to fulfill his anti-terrorism fantasies?

While the mainstream media still hasn't really caught onto this story, some reports are starting to trickle out discussing this failed operation.  Right-wing media is praising Trump for his reaction to the deceased and response to the family, pointing the finger at the Obama administration for creating this plan (that Obama never implemented for tactical reasons and that Trump decided to greenlight).  The rest of the real news agencies decided to explore this matter further and have had some military sources leak out information that Trump approved this operation without proper intelligence or preparation (hence why Obama did not go through with the operation and why U.S. Navy SEAL William "Ryan" Owens was still alive).

One of the three U.S. officials said on-the-ground surveillance of the compound was “minimal, at best.” “The decision was made ... to leave it to the incoming administration, partly in the hope that more and better intelligence could be collected,” that official said.

Generals Mattis and Dunford pitched the idea to Trump, his son-in-law, and his political strategist over dinner one night and Trump agreed, without consulting military or intelligence.  A "pro-forma and irrelevant" inter-agency meeting was held after the fact to discuss the Trump-approved plan.

Spicer laid out the series of events leading up to the raid insisting it was thoroughly vetted, by both administrations, and that they decided to pursue this action because it was a "moonless night," but Slate's Fred Kaplan reported that the operations were also held off because of a change in policy that will change the structure of operations and how they are carried out.


Military officials briefed President Obama on the policy proposal, which would give lower-level officers broad latitude to carry out such attacks without going through the sluggish process of seeking authority from higher-ups. Since this would mean a significant escalation of America’s military involvement in Yemen, Obama deferred the issue to his successor, according to a former White House official.

These conflicting reports make you wonder if Spicer is only delivering his set of "alternate facts" or if that was the honest timeline.

Either way, it appears the Trump administration decided to go ahead with the operation because they believed there was enough proper vetting and that the previous Defense secretary signed off on the operation, but this sounds more like an excuse than anything else.  While having the blessing of his inner circle, Trump's actions resulted in the death of a serviceman and all his team can do is say that it isn't his fault and he was just going off the actions of the previous administration - an administration that he had repeatedly attacked for its military strategy.
Posted by Kevin at 4:18 PM 2 comments:

A recording of the recent GOP summit to replace the Affordable Care Act has been released and it shows that Republicans aren't quite on the same page on repeal and replace, with many having wildly different ideas on how to implement the new policies.  They had also discussed the political ramifications of their actions and how unpopular it would be for them to repeal the almost decade old law from the previous administration.

Republican lawmakers aired sharp concerns about their party’s quick push to repeal the Affordable Care Act at a closed-door meeting Thursday, according to a recording of the session obtained by The Washington Post.

The recording reveals a GOP that appears to be filled with doubts about how to make good on a long-standing promise to get rid of Obamacare without explicit guidance from President Trump or his administration. The thorny issues with which lawmakers grapple on the tape — including who may end up either losing coverage or paying more under a revamped system — highlight the financial and political challenges that flow from upending the current law.

Senators and House members expressed a range of concerns about the task ahead: how to prepare a replacement plan that can be ready to launch at the time of repeal; how to avoid deep damage to the health insurance market; how to keep premiums affordable for middle-class families; even how to avoid the political consequences of defunding Planned Parenthood, the women’s health-care organization, as many Republicans hope to do with the repeal of the ACA.

This predicament is quite interesting being that Republicans had voted over fifty times to repeal the law during the Obama years to no avail, claiming to have a better idea ready to go.  They championed "repeal and replace" and tried to convince voters that they would be taken care of but now that they have the opportunity to actually enact their policies it is revealed they actually have none.  On top of that, it appears Republicans are more concerned with keeping their party in political power than anything else.  They had created all of these wedge issues but had no plan on actual governance, which leads you to wonder just what they actually wanted to do when they got into power.

It is also interesting to see that in just a week of the Trump administration it appears that there is a tremendous amount of turmoil.  I only imagine it getting worse as the Republicans pretend to govern.
Posted by Kevin at 3:20 AM No comments:

Gizmodo published a post last week detailing how Donald Trump deleted a misspelled tweet from his personal Twitter account and made the claim that such an action may be illegal because he has become president and is now subject to various record-keeping laws.  While this legality of this action is probably not an issue, seeing as there appears to be no malicious act being performed, except to that of the English language, there was one observation that can be made from this - while that original tweet was deleted and subsequently corrected on his personal account one was also made to his official account: 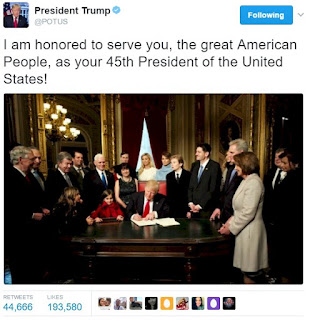 The potential issue isn't what is in this tweet but a detail that can be found in his Twitter bio: 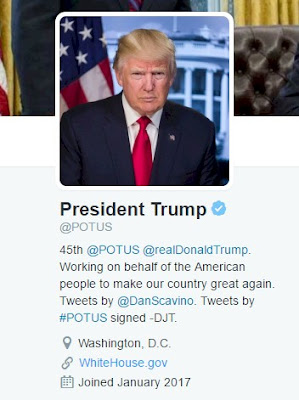 The detail in question is that he has a disclaimer right in the description - he is not really making posts on his official twitter unless signed with a "-DJT".

While this may not seem like big news, in light of the observation made by Gizmodo's original post about the application of record-keeping laws and official Twitter accounts, having such disclaimer appears to be a bit odd.  Also, look at the snapshots of the two tweets above from both his personal and official accounts.  They are both identical (ignoring the misspelling which was later fixed), with the official tweet lacking any signature from the president.

Granted, Trump's caddy-turned-Director-of-Social-Media Dan Scavino could have published this word-for-word tweet but this can also be a set-up to absolve the president of any Twitter sins and give the president somewhat plausible deniability.  Basically, Trump has created an online fall-guy in Scavino to protect himself from any digital shenanigans that have plagued other politicians in the past.  Also, this brings into question of who writes what on which account.

What is scary is that while this kind of post may have been loony in the past, it seems quite possible now.  Will Trump be the first president to experience a real Twitter scandal?
Posted by Kevin at 3:36 PM No comments: In a recent development on the confirmation of President Donald Trump's pick for the Secretary of Education, Betsy DeVos, daughter-in-law of multi-level marketing (pyramid scheme) billionaire Rich DeVos, DeVos had stated that during the congressional hearings she had learned that the word "Algebra" derives from the Arabic "al-jabr," which means a "reunion of broken parts" and that upon realizing its origin that she will work hard with congress to try and eliminate the studies from public curriculum.

"I support school choice.  Choice for the parents, especially those of different backgrounds like Christianity," DeVos said when pressed on her criticisms of the unifying principles of mathematics.  "For good Christian parents to be forced to have their children learn the principles of Islam is appalling and I will look into opening up options.  America, a Christian nation, should return to biblical math and God's praises and not indoctrination to alternate faiths."

When Democratic members of congress attempted to have her clarify her position DeVos refused to answer, stating that once the new administration gets situated and has an opportunity to review every aspect of governance than she could officially form an opinion.  Until then she only has her closely held beliefs and alternate facts, which weigh heavily on her decisions.

"I believe the mandate [Donald Trump] received from the election is pretty clear.  We need to bring back control of the schools to the people and not bureaucrats in the swamp.  Communities need to be in charge to make America great again," adding "perhaps we can even rename the study and make it more American.  That will allow for better understanding and growth and proficiency."

Asked if she intended to continue the push for Common Core, DeVos applauded the former First Lady's campaign to get school children to be healthier and increase activity exercising their core muscles more frequently but did not agree with the Federal overreach and believed such actions are best kept at the local level.

The administration initially refused to comment but then later released a statement that "everything is on the table" and that we need to "bring back education" to America.
Posted by Kevin at 9:26 AM 1 comment: