Eminent Domain and the Art of the Deal 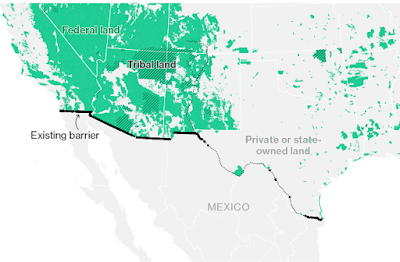 Donald Trump talked about building a wall throughout the entirety of his campaign as well as the rocky first month of his presidency.  He was going to build a big wall - a great wall.  It was going to be long with a big door to let immigrant in legally.  This rhetoric sounds nice when vying for the votes of the electorate but there is the nitty-gritty reality of such an endeavor - property rights.

As Bloomberg had reported, much of the land on the southern border is privately owned and while there have been laws passed to construct a wall, the results have been mired in lengthy court battles or exorbitant costs associated with acquiring such land.  That is why the so-called border wall currently has so many walls - it has only been able to be constructed on federally-owned property.

While the government has purchased land in the past for the purpose of constructing a wall, here lies the dilemma - Trump's campaign rhetoric and electoral victory may have inadvertently increased the fair market value of those properties.  As stated in the Wall Street Journal, prices for border land in the past had ballooned from hundreds of thousands of dollars to multi-million dollar amounts, and that was before Trump started trumpeting his desire to build a wall deep in the heart of Texas.

If anybody should have realized the supply and demand nature of property, self-proclaimed real estate guru Trump should have been that person.  Instead he threw the "location, location, location" mantra out the window for some cheap votes instead and now it will end up costing him the American tax-payer (that is if he decides to steal private property).

He should have learned a lesson from a real titan of industry - Walt Disney.  When Disney wanted to build a theme park/resort in Florida he kept it on the down-low, bullied local government, and ripped off local landowners to buy property on the cheap.  Maybe Trump should pick up a book for once instead of watching Fox News or firing off a tweetstorm early in the morning.
Posted by Kevin at 9:26 AM