The Hypocrisy Of Erick Erickson's 53%

Over at the Wonk Blog Monday, The Washington Post's Suzy Khimm shed light on CNN contributor and Red State editor Erick Erickson's decision to lead a conservative "counterpunch to the viral 'We are the 99 percent' site that's become a prominent symbol for the Occupy Wall Street movement."

WeAreThe99Percent allows users to post images with testimonials laying out their personal struggles amid growing income inequality, in order to explain their support for the growing Occupy Wall Street movement against economic and social injustice.

In response, Erickson posted a testimonial calling the protesters "whiners," and claiming to represent the "53 percent subsidizing you so you can hang out on Wall Street and complain." After a Twitter campaign to promote his movement, several people have responded with similar testimonials.

Gawker has more on Erickson's movement calling it "a response to 'We Are the 99 Percent,' an Occupy Wall Street-affiliated blog that collects the stories of the underemployed, overworked, debt-ridden and uninsured victims of the recession."

Gawker points out that Erickson's movement is centered around the misleading notion that nearly half of Americans don't pay taxes. As The New York Times David Leonhardt noted in April, the figure distorts the economic debate away from growing income inequality and completely ignores taxes that all American households pay.

In the post that sparked the "counterpunch" Erickson wrote that he works "three jobs," and complained about insurance costs and the housing market, adding "But I don't blame Wall Street."

With that being said, I thought I would shed some light on some of those 53 Percenters. 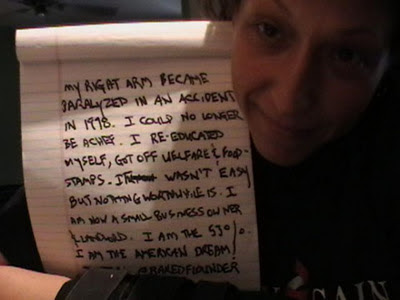 This individual praises their tax paying status by acknowledging the fact that they wouldn't have been able to achieve this feat had they not received welfare and food stamps. 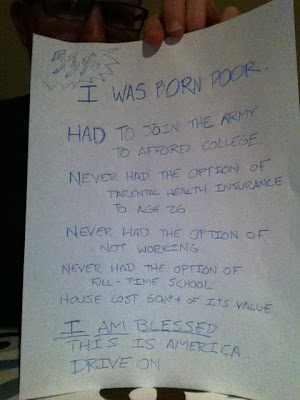 This person was born poor so they most likely had some sort of government support in their past, but again, they admit that the only way out of poverty was to accept a government check by joining the military to pay for school.  While they may not have had the benefits of staying on their parent's health insurance plan, being a member of the military would have granted him access to veteran's benefits like health care.

The reference of his house losing over fifty percent of its value is interesting.  This is a simple admission that he purchased his home during the housing boom and it had lost its value as a result of that institution he does not wish to blame. 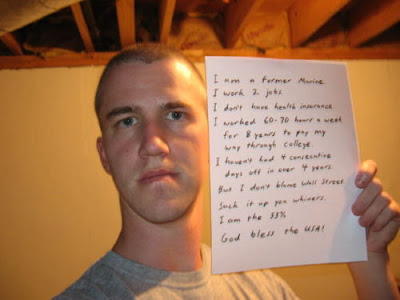 Another veteran, this person claims to have a college education but has to work two jobs to make it and still does not have health insurance.  Assuming he works two jobs out of necessity, who would pay his hospital bills should he get sick? 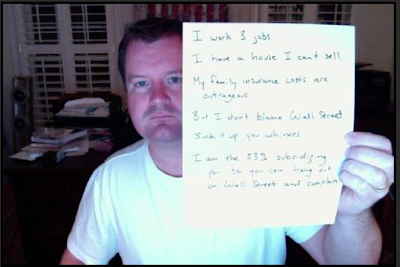 Why can't he sell his house and why are his insurance costs outrageous? 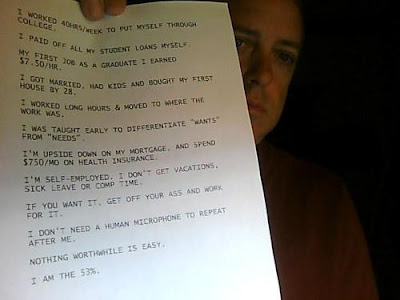 Apparently this person never fully learned the differences between "wants" and "needs" - they paid more for their home then what it is worth and now they complain that they spend close to $12,000 per year on health insurance. 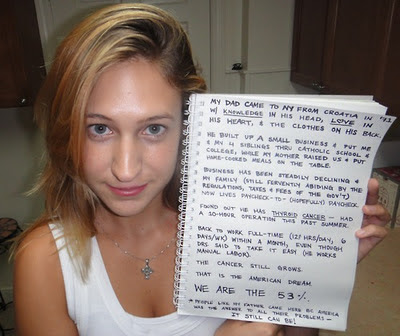 This lady is proud that the American dream for immigrants to come to this nation, work hard, get sick, and die. 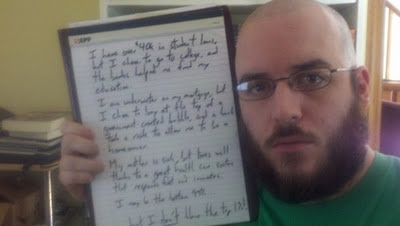 This person took out loans for school, paid too much on his house, but then proceeds to blame the government for his over-priced home.  He admits that he is in the bottom 99 percent but he accepts responsibility for his actions, or at least he doesn't blame the wealthy or Wall Street - just the government. 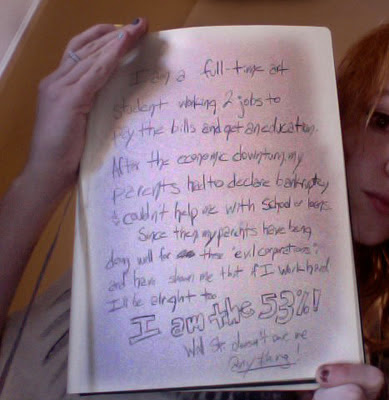 This girl is just asking to be in the bottom 99 percent - what kind of career is in store for an art student?

A common theme is that many of these people had assistance in their climb to success (or realization that they will always be a working-class citizen).  What they don't understand is that the anger over Wall Street or corporations is not that they exist, but it is similar to the anger of the Tea Party - these institutions accepts taxpayer money - our money - and then they turned around and kept the cash, paid off debts, and gave multi-million dollar bonuses to their executives while average Americans were facing increasing medical costs, increasing education costs, and decreasing home values.

Conservatives are pushing back against the Occupy Wall Street movement because it resonates with a majority of Americans and these images are evidence of the right-wing spin machine on full spin.  These people have benefited from assistance and would most likely not be affected by reform yet they believe they would should the demands of the Occupy protesters are met - where were those concerns when the tea party was upset with the government bailouts?  Where is the anger over their artificially inflated medical costs?  Their upside-down mortgages?

I understand accepting a certain level of responsibility for one's actions but these people have been convinced to accept the actions of others as fair and normal business as usual.
Posted by Kevin at 3:44 PM