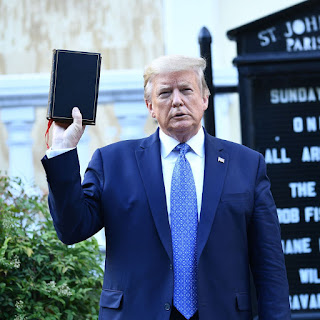 On June 1st, President Trump gave a short speech in the Rose Garden and then inexplicably walked to a church down the street to hold up a bible, take a picture, and then walk away.  All of this occurred while peaceful protesters were violently cleared.  The administration had claimed that the protesters were removed because they were not peaceful, throwing water bottles and rumors they were building a supply of rocks to also use against police but none of those claims had been verified by any reputable news source.

When questioned about the removal on Friday, June 5th, Attorney General Bill Barr had this to say:

“I’m not involved in giving tactical commands like that. I was frustrated and I was also worried that as the crowd grew, it was going to be harder and harder to do. So my attitude was get it done, but I didn’t say, ‘Go do it.’ ”

“They had the Park Police mounted unit ready, so it was just a matter of execution. So, I didn’t just say to them, ‘Go.'”

This is contrary to what one justice department official said, recounting that Barr essentially said ‘This needs to be done. Get it done.’ ”

This was also confirmed by White House Press Secretary Kayleigh McEnany insisting that Barr said "that we needed to get going with moving that perimeter. He told the officers that out there."

As Bloomberg also reported, Trump was angry about the unrest and the damage caused and so aides set forth to help facilitate his walk.

So according to Barr on Friday, he did not give the command for officers to attack protesters but if you were to ask Barr two days later, on Sunday, you might have gotten a different response.

"When I came in Monday, it was clear to me that we did have to increase the perimeter on that side of Lafayette Park and push it out one block. That decision was made by me in the morning. It was communicated to all the police agencies, including the Metropolitan Police at 2:00 p.m. that day. The effort was to move the perimeter one block, and it had to be done when we had enough people in place to achieve that. And that decision, as I say, was communicated to the police at 2:00 p.m.."

So in a couple days Barr went from "I didn't say, "Go do it" to "that decision was made by me."

So now you can see why there is question about other accounts by Barr, such as the volatility of the crowd or even the relationship between the clearing and the president's walk, but when has the president ever walked to somewhere from the White House?  And it just happened to be at the same time the Attorney General ordered police to clear protesters?

I guess Barr got his denial for the 24-hour news cycle hoping the story would change come Monday.
Posted by Kevin at 9:05 AM