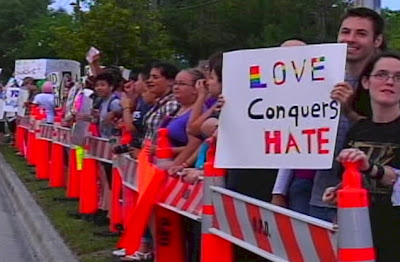 The church claimed the school was "infested" with homosexuals and targeted students, "brutish teachers," and "hateful parents."

It is still my belief that the members of the Westboro Baptist Church violated Florida's anti-bullying laws which state.

HB 669, also known as the “Jeffrey Johnston Stand Up for All Students Act,” prohibits bullying and harassment “of any student or school employee of a public K-12 educational institution.”
Bullying may involve teasing, social exclusion, intimidation, or public humiliation.

Considering the church targeted students and teachers with offensive slogans and that the protest attracted hundreds of counter-protesters, causing the school to change its schedule in order deal with the extremist church, I would say the actions of those ten protesters fall under the definition of HB 669 and they should be held accountable.

Contact your area's local officials to push for action against this organization that has decided to ignore Florida law in order to spread their hate.

Email links for the following: